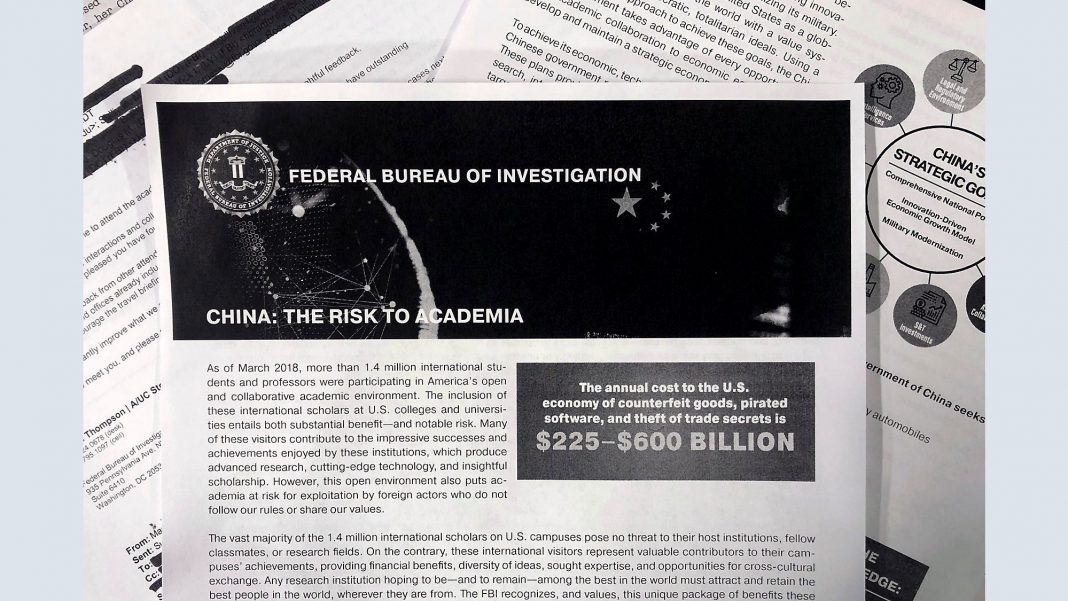 As the U.S. warned allies around the world that Chinese tech giant Huawei was a security threat, the FBI was making the same point quietly to a Midwestern university.

In an email to the associate vice chancellor for research at the University of Illinois-Urbana-Champaign, an agent wanted to know if administrators believed Huawei had stolen any intellectual property from the school.

“When we go to the universities, what we’re trying to do is highlight the risk to them without discouraging them from welcoming the researchers and students from a country like China,” Assistant Attorney General John Demers, the Justice Department’s top national security official, said in an interview.

“Existentially, we look at China as our greatest threat from an intelligence perspective, and they succeeded significantly in the last decade from stealing our best and brightest technology,” said William Evanina, the U.S. government’s chief counterintelligence official.

The threat, officials say, is more than theoretical.

The University of Minnesota did the same, with an administrator reassuring the FBI in an email last May that issues raised by a best practices letter an agent forwarded “have certainly been topics of conversation (and occasionally even action) in our halls for a while now.”

But the Justice Department’s track record hasn’t been perfect, leading to pushback from some that the concerns are overstated.

“There are real tensions between these two realities, and no simple solutions,” he wrote. “I do not think we would be wise to create new ‘policy’ on terrain this complex and fraught with internal trade-offs between legitimate concerns and values without some real dialogue on the matter.”

A University of Colorado associate vice chancellor equivocated in January on how to handle an agent’s request for a meeting, emailing colleagues that the request to discuss university research felt “probing” and like “more of a fishing expedition” than past occasions. Another administrator replied that the FBI presumably wanted to discuss intellectual property theft, calling it “bright on their radar.”

Kevin Gamache, chief research security officer for the Texas A&M University system, told AP he values his FBI interactions and that the communication goes both ways. The FBI shares threat information and administrators educate law enforcement about the realities of university research.

“There’s no magic pill,” Gamache said. “It’s a dialogue that has to be ongoing.”

Some outreach is more general, like an agent’s offer to brief New Mexico State University on “how the FBI can best serve and protect.”

Last year, an agent warning of a “trend of international hostile collection efforts at US universities” asked Oklahoma State University if it had researchers in encryption research or quantum computing.

The University of Colorado received an FBI request about an “internal investigation” into a professor’s “possible misuse” of NIH funding. The school said it found no misconduct involving the professor, who has resigned.