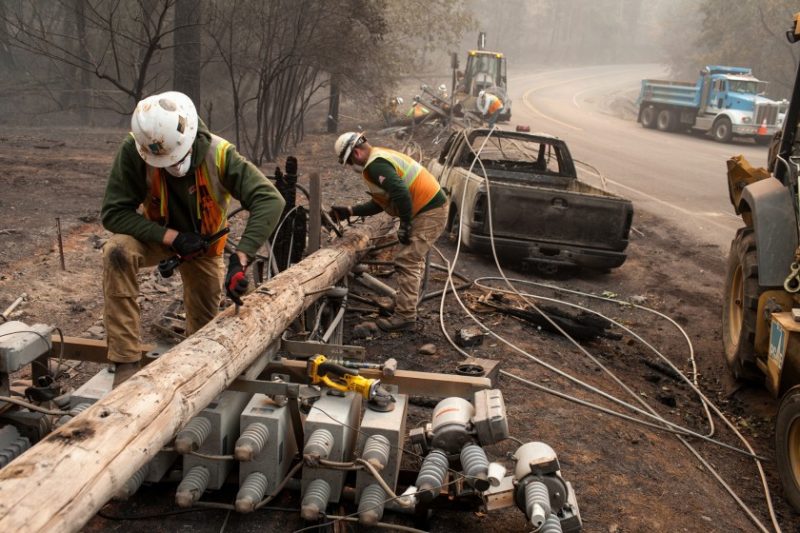 Millions of people were poised to lose electricity throughout northern and central California after Pacific Gas &amp; Electric Co. announced Tuesday it would shut off power in the largest preventive outage in state history to try to avert wildfires caused by faulty lines.

PG&amp;E said it would begin turning off power to 800,000 customers in 34 counties starting after midnight Wednesday amid forecasts of windy, dry weather that create extreme fire danger. To the south, Southern California Edison also said Tuesday that more than 106,000 of its customers in parts of eight counties could face power cuts.

Outages are planned in more than half of California’s 58 counties, although not everyone in those counties will have their power cut.

The news came as residents in the region’s wine country north of San Francisco marked the two-year anniversary of deadly wildfires that killed 44 and destroyed thousands of homes. San Francisco is the only county in the nine-county Bay Area where power will not be affected.

The utility had warned of the possibility of a widespread shut-off Monday, prompting residents to flock to stores for supplies as they prepared for dying cellphone batteries, automatic garages that won’t work and lukewarm refrigerators.

Flashlights, batteries and propane tanks for barbecues were in high demand as people prepared for an outage that PG&amp;E said may last “several days.”

“We sold out of lanterns this morning. The shelf is completely empty,” said Howard Gibbs, the manager at Ace Hardware in the town of Lafayette, 20 miles (32 kilometers) east of San Francisco. “We’ve got just a few flashlights left, and we’re down to our last couple propane tanks, too.”

Oakland Mayor Libby Schaaf asked residents Tuesday not to clog 911 lines with non-emergencies and urged people to be prepared. The city canceled all police officers’ days off in preparation for the outages.

“We all know the devastation that fires can cause,” she said.

In 1991, a grass fire torched the Oakland Hills, killing 25 people and destroying more than 3,000 homes.

Gov. Gavin Newsom said PG&amp;E had no choice given that it would have faced liability for fire damage but he said customers are right to feel outraged. The utility needs to upgrade and fix its equipment so massive outages aren’t the norm going forward, he said.

“No one is satisfied with this, no one is happy with this,” he said.

The outage will also affect portions of the agricultural Central Valley, the state’s northern and central coasts and the Sierra Nevada foothills where a November wildfire blamed on PG&amp;E transmission lines killed 85 people and devastated the town of Paradise.

Statues toppled throughout US in protests against racism