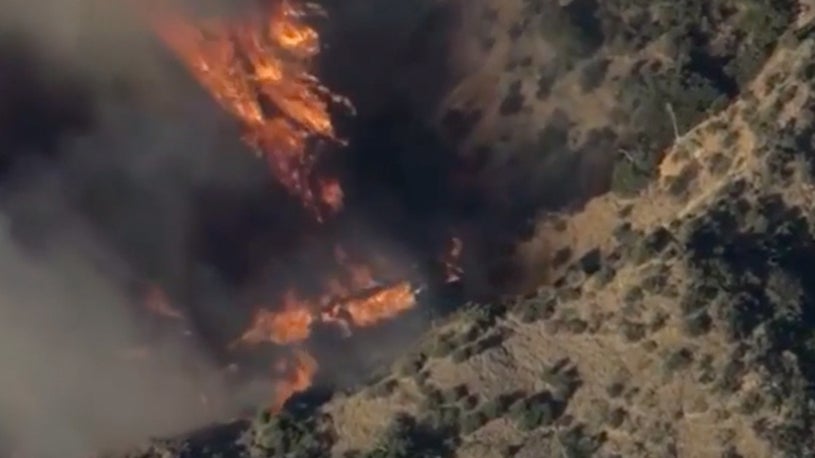 An aggressive wildfire in Southern California seared its way through dry vegetation Friday and spread quickly, destroying more than a dozen homes as tens of thousands of residents were ordered to get out of its way, authorities said.

Those who left included Edwin Bernard, who said he never saw the flames arrive so quickly or come so close to his home as this time.

He watched as the fire swept down a hillside, sizzling through dry grass and igniting trees and bushes and spitting embers over his home of 30 years. He and his wife fled in their car, leaving behind medication, photo albums and their four cats.

“It was a whole curtain of fire,” Bernard said Friday. “There was fire on all sides. We had to leave.”

The region has been on high alert as notoriously powerful Santa Ana winds brought dry desert air to a desiccated landscape that only needed a spark to erupt.

Family initially blamed the outage for the death of an El Dorado County man dependent on oxygen, but the coroner later said he died from severe coronary disease.

Southern California Edison said it owns the transmission tower shown on KABC-TV, but a spokeswoman would not confirm that was where the fire began. The utility said it could take a long time to determine the cause and origin of the fire.

Schools and colleges closed for the day and Interstate 5, the main north-to-south corridor in the state, was shut down at the northern end of Los Angeles. Several sections of nearby freeways were also closed for much of the day.

“As you can imagine the embers from the wind have been traveling a significant distance which causes another fire to start,” Terrazas said.

Jonathan Stahl was driving home to Valencia when he saw the smoke and immediately diverted to a mobile home park in Sylmar where his grandmother and aunt live together.

The park had been nearly wiped out in 2008 when one of the city’s most destructive fires leveled 500 homes.

“Oh my God, it’s coming this way,” his aunt said when Stahl called to alert them and she looked out the window, he said.

Stahl helped his grandmother, Beverly Stahl, 91, who was in her pajamas, and his aunt to pack clothing, medication and take their two dogs. They saw flames in the distance as they drove away.

At the site of the other fire, in Calimesa, residents of the trailer park anxiously waited to see if their homes had survived the fast-moving blaze.

“The hardest part is my mom’s remains are in there,” she said Friday morning, choking back tears.