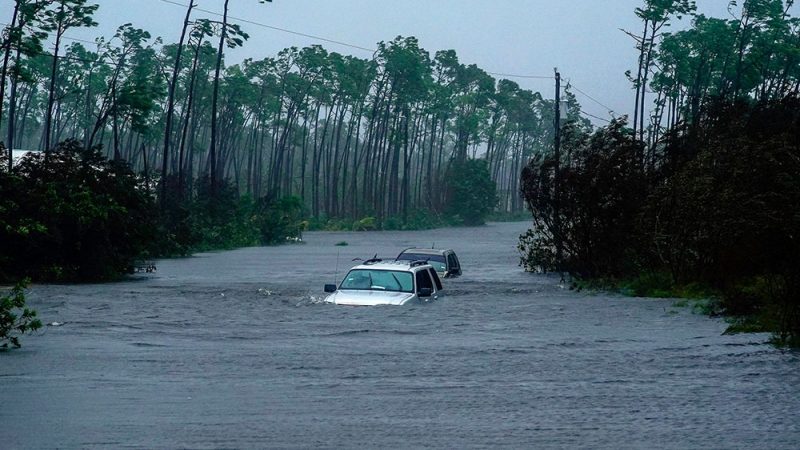 At least seven people are confirmed to have died in the Bahamas after Hurricane Dorian wreaked havoc on the island nation.

Prime Minister Hubert Minnis said the country can “expect more deaths”, and said parts of the Abaco Islands had been “decimated” by the storm.

The hurricane has finally moved away from the Bahamas after causing widespread destruction.

Latest reports say the storm is moving parallel to the coast of Florida.

Although Hurricane Dorian has weakened to a category two storm it has grown larger in area, and has maximum sustained winds of 110mph (177km/h).

What did the prime minister say?

Mr Minnis held a press conference after he and a delegation of other politicians and officials conducted an initial assessment of the damage to the Abaco Islands.

“Parts of Abaco are decimated,” the prime minister said, reporting there had been “severe flooding and severe damage” to homes, businesses and infrastructure – with the area around the airport now looking “like a lake”.

The north of the island – including the town of Marsh Harbor – was more badly affected than the south, he said.

Opposition leader Philip Brave Davis described the scenes from a flight over the island as a “horrible sight”.

He praised first responders and the “bravery and fortitude” of his fellow citizens, stressing that more food and supplies are ready for distribution once the weather settles.

Where is the storm now?

An official from the nation’s weather agency said the centre of the storm now lay 85 miles (135km) north of the city of Freeport on Grand Bahama, and was moving slowly away from the island chain.

The National Hurricane Centre reports Hurricane Dorian is now moving parallel to the coast of Florida, and is moving northwest at 6mph (9km/h).

Florida, Georgia and North and South Carolina will still feel the impact of the storm and have all declared states of emergency, with mandatory evacuation orders across many areas.

Walt Disney World, Legoland and other tourist parks have announced early closures in anticipation of the hurricane.

Scientists cannot say whether climate change is increasing the number of hurricanes, but the ones that do happen are likely to be more powerful and more destructive because of our warming climate, Weather’s Tomasz Schafernaker.

Ethiopian military has ‘completed and ceased’ operations in Tigray