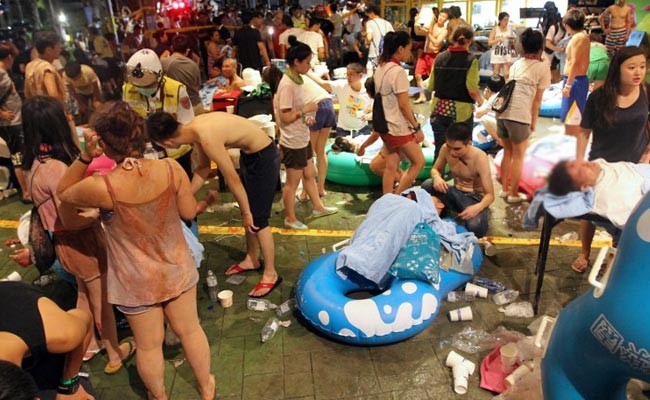 Taiwan’s Ministry of Health and Welfare put out a call for medical supplies and skin grafts for the hundreds injured after flammable powder exploded in midair at a recreational water park, Taiwanese media reported.

By late Sunday, no fatalities had been reported, and the total number of injuries had dropped to 498, according to Taiwan’s Central News Agency, which cited New Taipei’s Public Health Department. The department said some of the injured were inadvertently counted twice in its previous tally of 524.

Forty-three hospitals are treating casualties, CNA reported, and 202 of the victims are in critical condition.

Most of the victims, 485 of them, are Taiwanese, but 13 foreigners were also injured, CNA said. The majority of injured foreigners are female. They include residents of Hong Kong, mainland China, Japan, Singapore and Malaysia.

Though the New Taipei government said the nationalities of three of the victims had not yet been confirmed, it was reported earlier that a “European or American” man was among the wounded.

Of the injured, 182 are hospitalized in intensive care units, New Taipei public health officials said. More than 60 have been discharged after treatment.

Liu Yeuh-Ping of Taipei’s Department of Health told CNN that while there was ample room for patients in intensive care units, there are not enough spaces in the specialized burn units, so health authorities are trying to move patients in need of intensive burn care.

Firefighters said the firestorm erupted around 8:30 p.m. Saturday (8:30 a.m. ET), when a flammable powder substance blew up over a stage at Formosa Fun Coast, according to a CNA report.

Video showed a massive fireball suddenly engulfing the stage, followed by screaming people running for their lives through flames.

“The fire came too fast and nobody was able to run,” said witness Huang Guan Zhang, 19. “Everybody was burned. … Nobody could save others and people suffered severe burns.”

Some people used large, inflated inner tubes as stretchers to carry out the injured, CNA reported.

After visiting with hospitalized victims, Taiwan’s Premier Mao Chi-Kuo announced a ban on color powder events while the incident is being investigated, according to CNA. In a video distributed by the government, he said the ban would be in place until color powder can be proved safe.

President Ma Ying-Jeou also met with people injured in the fire. He said the Taiwanese government would help the victims and promised a full investigation.

Five people have been questioned in connection with the blast, according to Tu Yi Te, secretary in chief of the Luzhou District police department. He said two of them are considered to be suspects — the organizer of the party and the person in charge of lighting and hardware.

They were brought to the prosecutor for further questioning, Tu said, and CNA reported the Taipei Shilin District Prosecutors Office released the two on bail and barred them from leaving the country. Organizer Lu Chung-chi’s bail was about $32,000, while the hardware engineer’s was almost $9,700, CNA said.

Mayor Eric Chu called it the “worst incident of mass injury (ever) in New Taipei,” Taiwan’s most populous city.

Formosa Fun Coast said the fiery explosion occurred during a “Color Play Asia” party put on by a separate company that leased out space at the park.

“We are very regretful (for) this accident that caused injuries to many victims,” Formosa Fun Coast said in a statement. “The most urgent matter currently for us is to handle and assist with … victims on the scene and work comprehensively with the New Taipei Fire Department.”

“We need to apologize to the families. I am very sorry that something like this happened,” Lu told CNA. “We shoulder ultimate responsibility.”