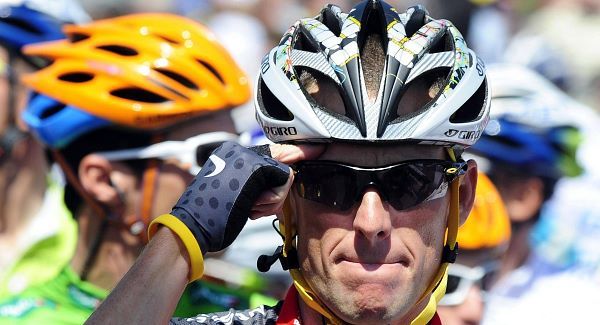 Lance Armstrong will be going with controversial plans to ride part of the Tour de France route for charity. The disgraced drugs cheat will join ex-England footballer Geoff Thomas for the hilly stages on 16 and 17 July. Cancer survivor Thomas and a team of amateurs are aiming to raise £1m for Cure Leukemia by cycling each stage a day before the official peloton.

“We know Lance’s involvement has split opinion, so we’ve tried to be as respectful as possible,” said Thomas. “The stages Lance will be riding come towards the end of week two, when I know all the riders will need some support. “I know his arrival will give them the encouragement they will need to carry on with this grueling challenge and in turn raise as much money as possible for blood cancer patients.” Armstrong will ride the 198.5km 13th stage between Muret and Rodez on 16 July and the following day tackle the 198.5km 14th stage from Rodez to Mende.

A cynic might say Lance Armstrong is dodging the big crowds of the first week and the big mountains of the last, and while those factors may have crossed his mind the truth is his family commitments and legal issues made the Tour’s second week his only option.

His many detractors will not care either way, for them he is an unwelcome distraction whichever stages he picked, but those more willing to view this venture as an act of charity could be disappointed he is not taking on Tourmalet and other mountainous Pyrenean icons: perhaps the memories, as much as the meters uphill, were too much of an obstacle.

The two stages he has chosen, however, are not without bumps and humps, particularly on the approach to his finish line in Mende. Will he get lumps of abuse from the roadside? He will get some, for sure, but I suspect his passage will be smoother than his critics would like.

The American was stripped of his record seven Tour titles and banned from most organised sport for life by the US Anti-Doping Agency (Usada) in 2012. He later admitted on US television that he had used performance-enhancing drugs during all of his Tour victories, and news of his controversial return to France has shocked many within the sport.

In March the Texan was warned not to take part in the ride by International Cycling Union (UCI) president Brian Cookson, who said it was “completely disrespectful” to the current riders, cycling authorities and the race.

“Lance would be well advised not to take part in that,” he said. “I’m sure Geoff Thomas means well, but frankly I think that’s completely inappropriate.”

Armstrong, who recovered from life-threatening cancer in 1996, told the BBC in January that his ban made it very hard to do the charity work he did throughout most of his post-cancer career.

Thomas was diagnosed with leukemia in 2003, a year after he retired from a 20-year football career that saw him captain Crystal Palace in the FA Cup final and win nine England caps.

Inspired by Armstrong’s story, he rode the 2005 and 2007 Tour de France routes ahead of the professionals, raising £250,000 to fund research nurses at the Birmingham hospital that treated his cancer. Now 50, he is trying it again and persuaded Armstrong to join the team in a bid to raise money for the Cure Leukemia charity.

Team Sky principal Sir Dave Brailsford told The Times Armstrong had “done enough damage” to cycling and the Tour already. “For the sake of all clean riders in the peloton, who’ve already suffered enough from that era, leave them alone – enough’s enough,” Brailsford added.