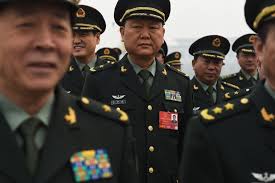 It is most likely to expect that China will raise its defense budget for the year in next month annual meeting of Parliament. China surprised last year with its lowest increase in six years, 7.6 percent, the first single-digit rise since 2010, following a nearly unbroken two-decade run of double-digit jumps.

Since the rising star admiral taking command of China’s navy, it’s on prominent role. Actually, China seeks to check the dominancy of United States on sea routes. As President Donald Trump‘s moves are taking unpredictable by Beijing. Apart from this, with President Donald Trump promising a U.S. shipbuilding spree and unnerving Beijing with his unpredictable approach on hot button issues including Taiwan and the South and East China Seas, China is pushing to narrow the gap with the U.S. Navy.

Richard Bitzinger,Senior Fellow and Coordinator of the Military Transformations Program at the S.Rajaratnam School of International Studies in Singapore said that, “Certainly, the PLA Navy has really been the beneficiary of a lot of this new spending in the past 15 years, We don’t how much they spend on the navy, but simply extrapolating from the quantity and the quality of things that are coming out of their shipyards, it’s pretty amazing.”