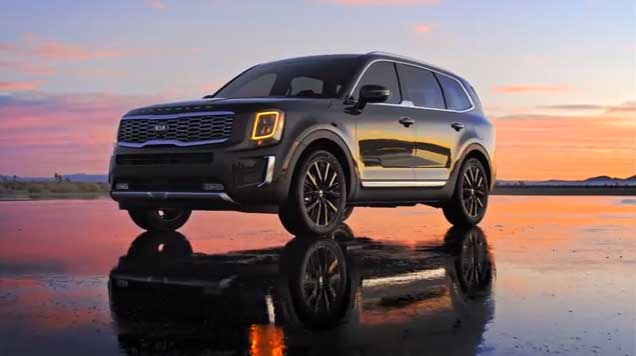 Kia has ostensibly competed in the hot-selling three-row crossover segment for a few years with the Sorento, but it’s not until now that it has really entered the big leagues, with the new 2020 Telluride SUV. Larger than the Sorento in nearly every dimension, the Telluride is finally a worthy rival for the likes of the Ford Explorer and Honda Pilot-and it has the boxy, bold styling to prove it.

After Kia released pricing that revealed the Telluride to be a fantastic value when stacked up to its closest competitors, we decided to play around with the online configurator and find the version that offers the most bang for your buck. Here’s what we settled on.

The Telluride offers four trim levels-LX, S, EX, and SX-and the EX offers a desirable amount of standard equipment but still barely crests $40,000, even with the $2000 option for all-wheel drive. (All Telluride models come standard with a 3.3-liter V-6 engine and an eight-speed automatic transmission.)

While it may not look quite as cool as the SX with its black wheels (pictured at top), the EX has tons of kit, including a full complement of active-safety features, a larger 10.3-inch touchscreen display, a power liftgate, and a heated steering wheel. The EX’s eight-passenger setup with a three-across second-row seat also provides an extra measure of practicality compared with the top SX trim, which comes only with second-row captain’s chairs that reduce seating capacity to seven.

The towing package was an easy enough choice to make, as its reasonable $795 cost includes a hitch and a self-leveling rear suspension, helping to take advantage of the Telluride’s 5000-pound towing capacity. We liked the look of the Sangria exterior color for an extra $395, which pairs nicely with the gray leather interior. Lastly, we chose the $210 carpeted floor mats.

Our Telluride totals $41,535, a perfectly reasonable sum when you consider that many comparable three-row SUVs can easily top $50,000 when loaded up with options. Even a fully kitted Telluride SX comes in below $50K. We have yet to drive the Telluride, but on paper it’s already looking like a compelling choice within its class.