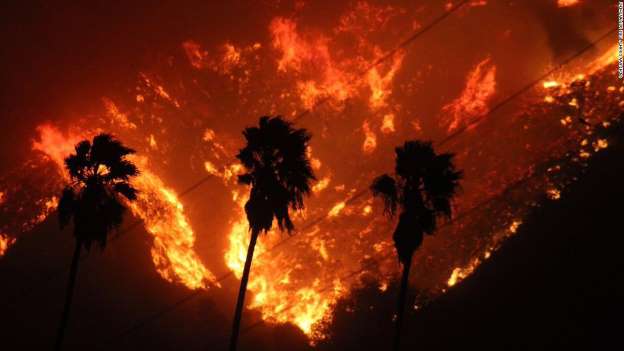 Investigators have determined that Southern California Edison power lines ignited the 2017 Thomas fire, a massive blaze in Ventura and Santa Barbara counties that killed two people and later gave rise to a massive mud flow that resulted in at least 20 deaths.

Following a 13-month probe by the California Department of Forestry and Fire Protection and Ventura County Fire Department investigators, officials found the fire was started by two power lines that slapped together during high winds on the evening of Dec. 4, 2017.

“A high wind event caused the power lines to come into contact with each other, creating an electrical arc,” the Ventura County Fire Department said in a press statement Wednesday. “The electrical arc deposited hot, burning or molten material onto the ground, in a receptive fuel bed, causing the fire. The common term for this situation is called ‘line slap,’ and the power line in question is owned by Southern California Edison.”

In October, the utility said its electrical equipment likely sparked at least one starting point in the massive fire, which burned 281,893 acres. The loss of vegetation in that area ultimately resulted in the collapse of hillsides north of Montecito during heavy rains on Jan. 9, 2018.

The finding puts the utility on the hook for not only more than $1.3 billion in insurance claims filed by Thomas fire victims, but also for the $400 million in claims filed after the Montecito slides.

Although Southern California Edison had acknowledged its equipment likely started a fire off Koenigstein Road in Santa Paula, its investigators concluded that the company was probably not responsible for a second, larger blaze that began in Anlauf Canyon earlier in the evening.

In the report released Wednesday, investigators said the Thomas fire first began as two separate fires that joined together and burned for 40 days. They determined the utility was responsible for both ignitions.

“We understand the ramifications around releasing information and making statements in this official report. … It was very thorough,” said Ventura County Fire Capt. Stan Ziegler.

Southern California Edison officials have said they will work with insurance companies to handle the thousands of claims that have accumulated since the fire and mudslide. The company is protected from going bankrupt over the disasters, thanks to a law signed during the summer that passes excess liability costs on to utility customers.