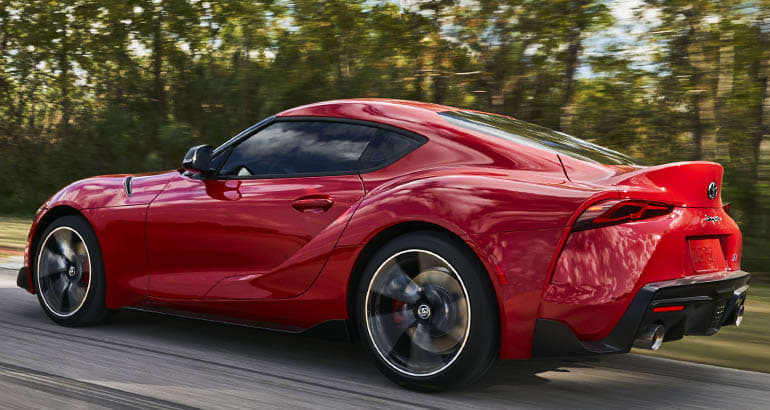 Let me quote something I wrote back in 2014 about the car that would become the precursor to Toyota’s new Supra—the FT-1 concept:

For all its oddities and awkwardness, the FT-1’s styling exercise appealed to a wide range of observers, including the most important one, Akio Toyoda, the CEO of Toyota who pushed the concept to production five years later. Our own omniscient Georg Kacher told us long ago Toyota was working with BMW on a joint-venture sports car. So instead of what I described five years ago as “a three-dimensional sketch,” which is all the FT-1 was, we now have a reasonably priced GT car that’s still a mess stylistically. And still very attractive.

So let’s look at why this basic five-year-old design is so appealing, despite the conflicts and confusion that definitely still exist in today’s Supra. Conflicts, it should be noted, that did not exist in the last A80 model of the Supra series (1993-2002), which was so sleek and well resolved that it was slightly boring. (I also seem to remember it was a little hard to move off dealer lots without financial incentives toward the end of its commercial life.) While that Supra was very nice, it lacked visual character or aggressiveness, which this A90 has in spades.

Despite the cost-saving simplifications imposed by practical reality, like suppressing the glass cover for the engine at the back of the long hood, plenty of drama remains. The Supra sports details like the double-bubble roof and a pair of big-bore, chromed exhaust pipes that supplant the overstyled outlets on the concept;

One of the intangible but vital aspects of a car’s total visual character is its ability to make you want—no, not just want, but fervently desire—to drive it. From the Detroit auto show feedback in 2014 and 2019, we’d say Toyota has a real winner on its hands.

About the FT-1 I said, “The best part of the car is the interior, which is seriously thought out, beautifully made, and extremely satisfying to be in.” About the Supra, I’m afraid I must say that this execution is so boringly gray and sedanlike that it should not be in a sports car at all. There’s nothing of the concept car in it, and the lack of color is deadly. (Toyota does offer a red interior for the Supra as well, depending on spec.)