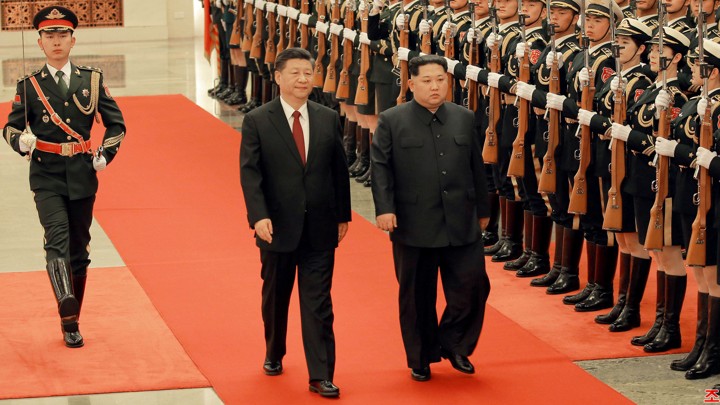 China’s President Xi Jinping is heading to North Korea for a meeting with Kim Jong-un, in the first Chinese state visit to the North since 2005.

The two, who have met in China four times, are expected to discuss the stalled talks over the North’s nuclear programme as well as economic issues.

China is hugely important to North Korea, as its main trading partner.

Mr Xi’s visit comes a week before the G20 summit in Japan, where he is set to meet US President Donald Trump.

It will also be his first meeting with Mr Kim since the Trump-Kim meeting in Hanoi in February ended without any agreement on North Korean denuclearisation.

Why is the visit happening now?

Mr Xi’s two-day visit will be the first by any Chinese leader to North Korea in 14 years and Mr Xi’s first since taking power in 2012.

It is being seen as a boost for Mr Kim, who has been struggling to maintain momentum after a flurry of diplomatic activity over the past year.

She says there might be some “symbolic value” in the visiting taking place just before the G20 summit, but that it’s “more of a bonus than a deciding factor”.

What does China want?

China’s main goal is stability in North Korea and economic co-operation, and ensuring that it remains a significant party in the negotiations over North Korea’s nuclear programme.

The two communist-led states are old allies. But ties have been strained over the past decade, with Pyongyang’s nuclear ambitions viewed critically by Beijing.

What does North Korea want?

The visit will enable Mr Kim to show that he still has China’s support, as other relationships are struggling.

“The North Koreans want to keep their friends close even if there isn’t a lot of trust and a lot of goodwill between them,” says Ms Town.

“China has proved to be the main destination for most of North Korea’s exports, including minerals, fish, textiles, and also workers,” North Korea analyst Peter Ward told the BBC.

Beijing traditionally is also the main importer of goods for North Korea’s industry and households. Under current sanctions, a lot of this trade has come to a halt.

But Kim Hyun-wook, a professor at the Korea National Diplomatic Academy, told Reuters that Chinese economic support – possibly even China creating a “hole” in sanctions – would mean Mr Kim “doesn’t have to negotiate with the US from a position of weakness”.

“It can have both nuclear weapons and economic aid from China,” he said.