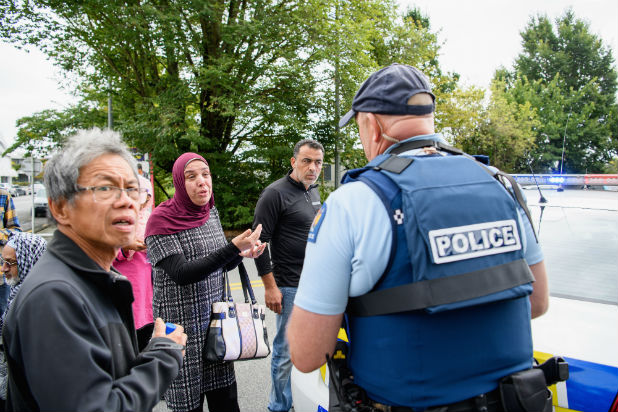 Islamic communities across the United States were on heightened alert Friday on the heels of horrific mass shootings at a pair of New Zealand mosques said to be orchestrated by a white supremacist targeting Muslims.

“They have very legitimate fears, and they are being told to be afraid by white supremacists and political leaders who believe in white supremacy,” he continued. “And we tell our community: do not be afraid, and do not abandon your mosques. Not today; not ever.”

That message was amplified by lawmakers on Capitol Hill, who expressed their horror with appeals for tenacity.

“This is concerning that a community that is an integral part of New York City has to be so fearful because of bigotry and hate,” Rep. Adriano Espaillat (D-N.Y.), who represents the Bronx, said Friday by phone from his district.

“There’s a lot of anxiety and fear, and quite a few people expressed that they don’t want to go to the mosque today, just in case there are copycats,” he said. “And they felt, better to be safe than sorry.”

Musri said law enforcers are planning walk throughs of the mosques, to lend advice on bolstering existing protections, including more cameras and security personnel – measures that were strengthened once before, following the 2016 Pulse nightclub shooting in Orlando.

“Sometimes you get to a point where you wonder what else can we do,” he said. “This is not a prison, this is a public place for worship. And we try to keep it open welcoming anyone and everyone.”

“There’s no credible threat here in the United States,” Newsham told a local NBC television station. “[But] one of the things we have to do is make our Muslim community in particular feel comfortable.”

He also invoked President Trump as an inspiration, calling the president “a symbol of renewed white identity and common purpose.” He was more critical of Trump’s leadership skills.

Joining other world leaders, Trump roundly condemned the attacks, offering his “warmest sympathy … after the horrible massacre” and vowing “any assistance the U.S.A. can give.”

“This hatred is even being amplified by our own president, who speaks of an ‘invasion of our country,'” Cohen said.

And Awad, of CAIR, went a step further, saying Trump is “responsible” for “the growing anti-Muslim sentiment” around the globe. He urged the president to denounce the white supremacist movement in no uncertain terms.

“Mr. Trump, your words matter, your policies matter,” Awad said. “You need to condemn this clearly today, and you do not need to be vague.”

On Capitol Hill, Lawmakers on both sides of the aisle rushed out statements reviling the New Zealand shooting – some with warnings that it may inspire similar attacks at home.

“I know that my fellow Muslims around the world are fearful of this, so I’m thankful that law enforcement and the intelligence community are on high alert,” Rep. Andre Carson (D-Ind.), one of three Muslim lawmakers currently in Congress, said in an email. “For too long, we have not felt fully comfortable practicing and living out our faith – and that’s profoundly unjust.”

“The antidote to this latest wave of hate and terror is solidarity,” said Rep. Jennifer Wexton (D), who represents a northern Virginia district where more than 6 percent of the population is Muslim.

“It’s on all of us to reject this dangerous ideology, but especially our leaders and lawmakers.”