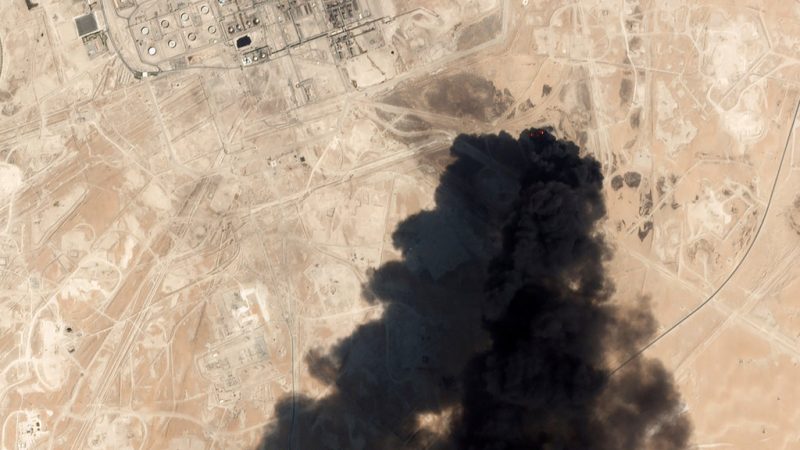 Iran on Sunday rejected U.S. accusations it was responsible for the devastating attacks on two oil installations in Saudi Arabia that forced the state oil company to suspend its production output by half and sparked fears of escalating hostilities across the Persian Gulf.

The Houthis, a rebel group in Yemen allied with Iran, had claimed responsibility for the attacks Saturday, saying it had sent a fleet of drones toward the Aramco facilities in eastern Saudi Arabia. Within hours later, Secretary of State Mike Pompeo blamed Iran directly for what he called “an unprecedented attack on the world’s energy supply.”

There was “no evidence the attacks came from Yemen,” Pompeo said in a tweet. His comments, along with a U.S. government damage assessment of one of the stricken oil facilities that suggested the attack might not have come from Yemen, fed speculation that the strikes had been launched from Iran, or by Tehran’s allies in neighboring Iraq.

The Trump administration has made isolating Iran a centerpiece of its foreign policy. The administration withdrew from the 2015 nuclear deal Tehran struck with world powers and imposed economic sanctions and an embargo on oil exports.

A senior Kuwaiti diplomat said his government was “extremely concerned” about the region’s stability in the wake of the attack. The diplomat, who spoke on the condition of anonymity because he was not authorized to speak to the media, did not say whether Kuwait believed Iran was directly involved.

The attack on Aramco “aimed to disrupt oil markets worldwide and to undermine regional stability,” he said. “It’s a very dangerous period in the gulf region.”

Officials in Iran and Iraq pushed back forcefully against allegations the attacks had come from their territories.

Iraq’s prime minister, Adel Abdul Mahdi, denied the strikes had been launched from his country. He said his government would “deal firmly” with anyone trying to attack neighboring countries from Iraq.

“We don’t need to provide evidence,” he added, and pointed out that Pompeo had not provided any proof that strikes had come from Iran or Iraq.

“They are trying to prove what they have said in the past,” said Amos Yadlin, a former chief of Israeli military intelligence. “That if they are not going to export oil, no one will export oil.”

The firm said “higher oil prices would add to the headwinds facing the global economy” and “could tip it into recession which would itself limit any prolonged period of excessively high oil prices as demand rebalances the market.”

Customers would also have to align location and quality of oil, an important factor in lining up crude with refineries capable of using it. As of Friday, the Strategic Petroleum Reserve held 644.8 million barrels of crude in four sites in Texas and Louisiana, according to the Energy Department.