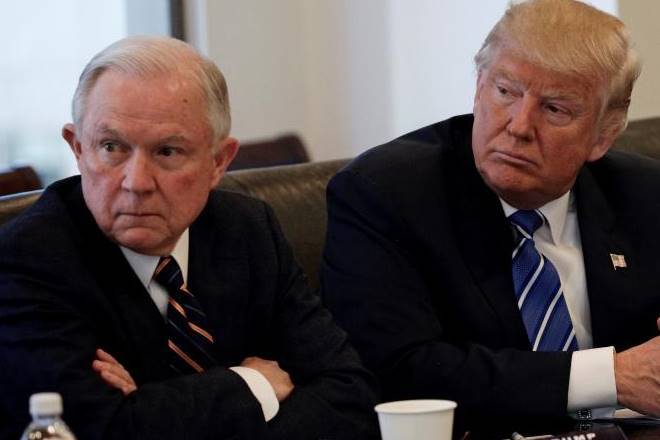 Mr Trump said Mr Sessions will be temporarily replaced by his chief of staff, Matthew Whitaker, who has criticised the Russia inquiry.

“Most importantly, in my time as attorney general, we have restored and upheld the rule of law,” Mr Sessions added, while thanking the Republican president.

“Given his previous comments advocating defunding and imposing limitations on the Mueller investigation, Mr Whitaker should recuse himself from its oversight for the duration of his time as acting attorney general.”

Why was Sessions fired?

Mr Trump has repeatedly pilloried his top law enforcement official since Mr Sessions stepped aside from the Russia inquiry in March 2017.

Special Counsel Robert Mueller is hunting for evidence of potential collusion between the Trump presidential campaign and Moscow.

Mr Sessions voluntarily removed himself from the probe after Democrats accused him of failing to disclose contacts with the Russian ambassador during his Senate confirmation hearing.

The attorney general later said he had forgotten about those meetings, which happened during the Trump election campaign.

The presidential axe that had been hovering over Jeff Sessions for what has seemed like an eternity just came swinging down with a thud. Donald Trump had previously said he would wait until after the mid-term elections to decide his attorney general’s fate, and he did – but just barely.

And like that the duties of overseeing Robert Mueller’s Russia investigation shift from the man who appointed the special counsel, Rod Rosenstein, to a man who has been a critic of it, Department of Justice Chief of Staff Matthew Whitaker.

What happens next is critical. Mr Mueller’s inquiry could continue unabated – although the special counsel must surely be considering tightening his timeline. There is also the possibility, however, that this is just the opening move of a White House effort to shut down the probe or keep its findings out of the public eye.