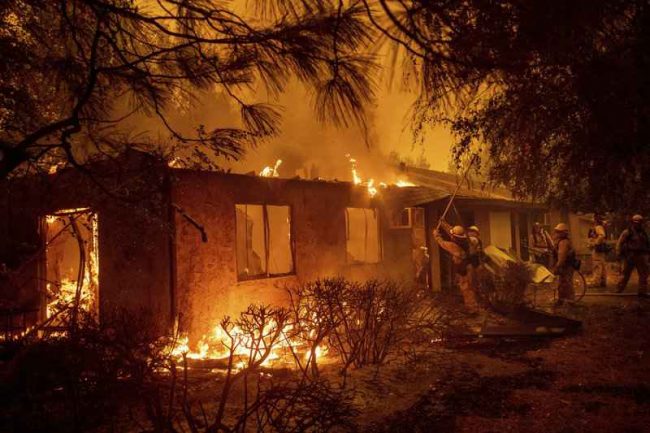 28,000 hectares of land in flames, cities must be partially evacuated. Particularly bad it has caught the small town of Paradise.

Several forest fires in California have routed thousands of people. At least five people were killed. They were found dead in their burned-out vehicles, the sheriff’s office in Butte County said. People tried to escape the flames. Because of the severe burn injuries, identification is not yet possible. In the north of the state on the west coast of the United States burned on Friday morning (local time) an area of ​​about 28,000 hectares.

The authorities said 15,000 homes were threatened by the flames in Butte County. Pictures from the small town of Paradise showed thick, black clouds of smoke and burning buildings. Also in the south, two larger fires raged. The well-known coastal town of Malibu had to be partially evacuated.

With persistent summer temperatures and drought, the fire danger on the US west coast is high. Strong wind makes the situation more difficult. The national meteorological service spoke of extreme conditions and warned against further fires. Civil protection chief Ghilarducci described the extent of the destruction caused by the fires as “heartbreaking”. 157,000 people had to leave their homes.

Vice Governor Gavin Newsom declared emergency for the districts of Butte County, Los Angeles County and Ventura County to mobilize aid quickly. There alone some 2,000 firefighters fought against the fires. The flames caused serious damage, especially in the small town of Paradise. “It destroyed the city,” the Los Angeles Times quoted a spokesman for the local fire department. In the 27,000-inhabitant community at least a thousand buildings were destroyed.

The fire broke out on Thursday morning (local time) and spread quickly. By Friday morning, the firefighters were able to contain it to five percent, as the California government announced. “This is a very dangerous fire,” Fire Authority CalFire wrote on Twitter. The authorities called on people in several cities to leave their homes.

In the south it burned near Los Angeles. The coastal town of Malibu, known for its beaches, had to be partially evacuated. The statement applies to the entire area south of the highway 101 between Ventura County and Malibu Canyon and also includes parts of the small town west of Los Angeles, the city announced on Friday morning (local time) on its website.

Media reported at least 15 burned houses in the Oak Park area of ​​Ventura County, north of the highway. The evacuation affected about 75,000 homes in Los Angeles and Ventura County, media reported. Residents were asked to use coastal roads for the evacuation. Roads through canyons should be avoided, it said.

Statues toppled throughout US in protests against racism