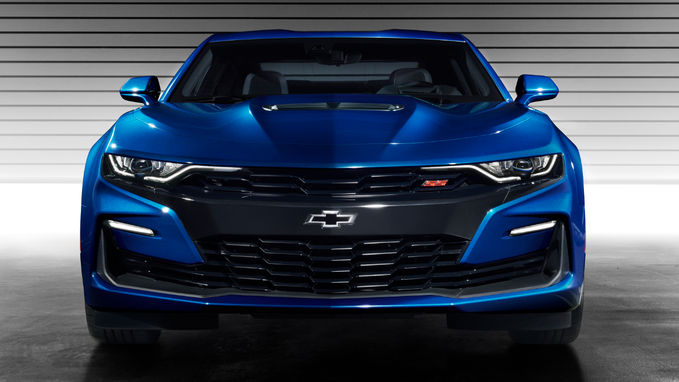 The 2020 Chevrolet Camaro lineup gets a few changes, including a new affordable V-8 model called the Camaro LT1 V-8 and revised front-end styling for the SS.

The V-6 model now offers a 10-speed automatic transmission as an option, replacing the previous eight-speed.

The updated Camaro, which also offers new colors and a few new features, goes on sale this fall.

After a controversial refresh for 2019, Chevrolet has revised the Camaro SS’s front-end styling for 2020, repositioning the bowtie emblem and making the bumper insert body-color. But that’s not even the most exciting of the changes Chevrolet is introducing for 2020: a new affordable model called the LT1 offers the burly 6.2-liter V-8 engine, previously offered only in the SS, at a lower price point.

The Camaro LT1 starts at $35,990, a $2005 drop compared to the current 2019 Camaro’s cheapest V-8 model, the 1SS which starts at $37,995. It also just undercuts the cheapest V-8–powered Ford Mustang, the $36,450 GT. The Camaro LT1 is essentially the same as the Camaro’s 1LT trim level, but with the 455-hp V-8 stuck under the hood. It also gets LT1 fender badges, the vented hood from the SS, and black bowtie emblems. A lesser wheel-and-tire package, with 20-inch wheels wrapped in all-season tires that are the same size all around, ensures that the LT1 won’t upset the performance hierarchy, as the SS still reigns supreme with its more aggressive, staggered-width summer tires.

Other changes for the 2020 Camaro include a new Rally Green exterior color and several rejiggered features and options. To list a few examples, the Recaro seats that used to be exclusive to the 1LE performance package are now available on the LT model, the rear spoiler that used to be only on the RS package can now be had on the LS and LT, and red seat belts can now be optioned on all trim levels.

Chevrolet hasn’t yet announced pricing for the full 2020 Camaro, but we expect to hear more over the next few months before it goes on sale this fall.