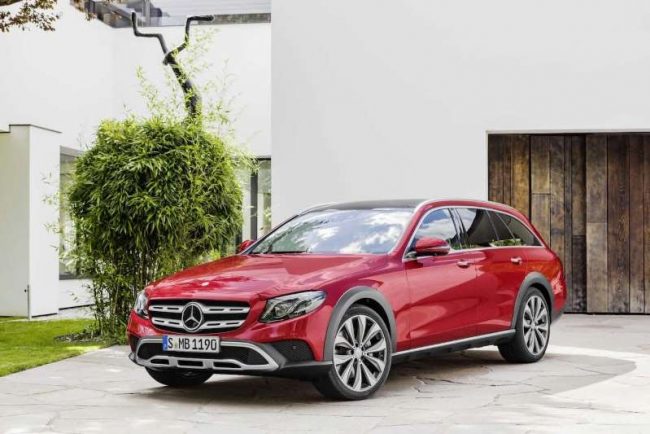 The Mercedes-AMG E 63 S wagon is a hoot, a laugh-out-loud combination of supercar and load lugger. But after you’ve impressed your buddies with a couple of thundering full-throttle acceleration runs and strafed an unsuspecting Porsche 911 or two late at night on the freeway, then what? Mostly, all that Sturm und Drang has the kids complaining they can’t concentrate on Peppa Pig and leaves the golden retriever a quivering heap in the load space. So mostly, you end up driving it like just like any other wagon.

That’s 603 hp, wasted. And those 911 guys have the last laugh, because everyone knows a Porsche is fast.

All of this makes the Mercedes-Benz E 350d 4Matic All-Terrain an intriguing proposition. True, Stuttgart’s answer to the Volvo V90 Cross Country and the Audi A6 Allroad is late to the party and derivative in execution, with the de rigueur matte plastic fender flares, chunkier grille styling, and faux skidplates. But to your neighbors, this jacked-up E-Class wagon looks like more of a rule-breaker than its AMG sibling. At the same time, your family will think it’s a lot more useful. And it won’t frighten the dog.

Daimler says only 5 percent of the All-Terrain’s parts are different from those of a regular E-Class wagon. Apart from the off-road cosmetics, it comes with height-adjustable air suspension and 20-inch wheels that between them bump the standard ride height 1.2 inches. In addition to the usual Comfort, Eco, and Sport drive modes, there’s an All-Terrain mode that lifts the car a further three-quarters of an inch at speeds of up to 20 mph, giving it a total of 6.2 inches of ground clearance. The nine-speed transmission and 4Matic all-wheel-drive system funnel 69 percent of the torque to the rear wheels.

Part wagon, part luxury car, part off-roader, the E-Class All-Terrain is a genuine all-rounder, one of those rare vehicles you could buy safe in the knowledge that it’s probably all the car you and your family are ever likely to need. At current exchange rates, its base price in the U.K. is equivalent to about $76,000. That’s roughly what U.S. buyers would pay for an E 400 4Matic wagon with similar options, and it’s 30 grand less than an E 63 S wagon.

And as good as it is, it’s about to get better: Mercedes-Benz has announced that the 2019 version of the All-Terrain, to be badged E 400d, will be powered by Daimler’s 3.0-liter inline-six turbodiesel. Power goes up to 335 hp, torque to more than 480 lb-ft, and eight-tenths of a second has been sliced from the 0-60 time. All that, and more refinement and smoothness, too.

Sure, Americans prefer SUVs to wagons, which is why MBUSA offers 28 SUV models but only two wagons: the E 400 4Matic and the E 63 S. The E-Class All-Terrain deserves to join the mix.