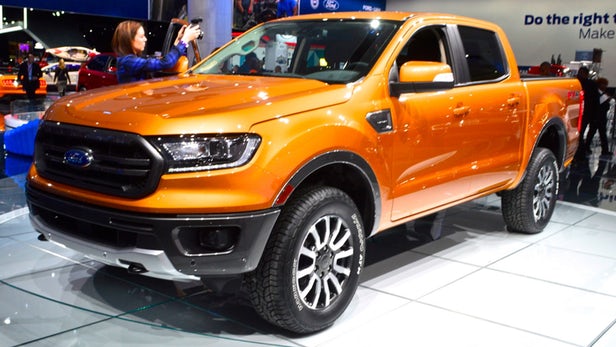 A new Ford Ranger on U.S. soil that appears to be dressed in the same duds that make up the Ranger Wildtrak model sold in other markets. In spite of its wild name, the Wildtrak isn’t quite as untamed as the upcoming Ranger Raptor, Ford’s off-road-ready Ranger equivalent to the larger F-150 Raptor. But, hey, it looks cool.

Why It Matters: We assume that this Wildtrak prototype ambled to northern Michigan because Ford is planning to bring it stateside. Ford has already committed to a comprehensive lineup of trim levels for the new Ranger, with XL, XLT, and Lariat versions slated to appear when the new truck goes on sale as a 2019 model later this year, and Chrome and Sport appearance packages will be on offer, too. Wildtrak off-road aesthetics would make a nice upgrade for the expected four-wheel-drive FX4 models. Alternatively, the truck seen here could be a convenient test mule for evaluating the Ranger’s rumored diesel engine in cold weather—note the piece of tape on the fuel door that has “diesel” written on it.

Platform: To the standard Ranger, the Wildtrak package adds a fairing behind the cab that extends onto the bedsides, plus special 18-inch wheels, running boards, aluminum roof rails, and a dark-colored finish for the grille, front bumper, and side mirrors. There aren’t any hardware upgrades over regular Rangers, although the interior comes with extra equipment and Wildtrak-specific accent stitching and floor mats.

Without getting too far ahead of ourselves, the Ranger may yet appear with a diesel engine in the United States. Nothing has been promised, but the production Ranger Raptor for non-U.S. markets sports a new high-performance twin-turbocharged 2.0-liter inline-four diesel, and lesser overseas Rangers make do with a turbo-diesel 3.2-liter inline-five. Either engine could come here, possibly in a Wildtrak or in other Rangers. But if the diesel turns out to be a no-go, Ford likely will use the 2019 U.S. Ranger’s turbocharged 2.3-liter gasoline-fed inline-four and 10-speed automatic transmission.

Estimated Arrival and Price: Don’t expect to see any possible Wildtrak here before 2019. Ford likely will focus on getting the basic Ranger lineup up and running before turning to special-edition models. Should the Wildtrak be equipped similarly to the Europe-market version, it will probably sit toward the higher end of the Ranger price spectrum.