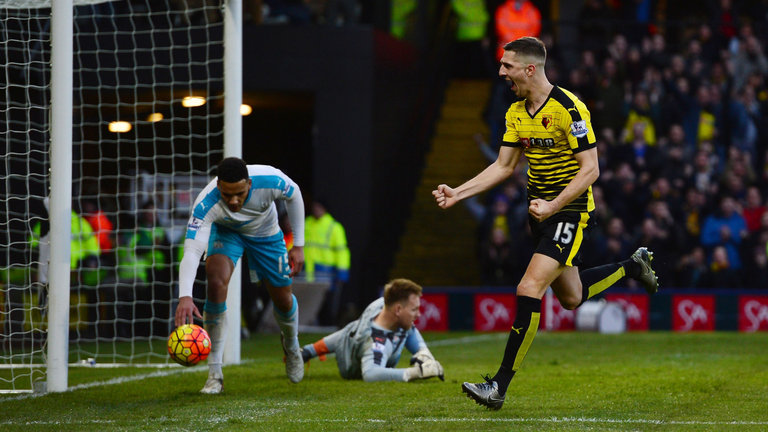 The Blues played an hour with 10 men after Tiemoue Bakayoko’s red card capped off a dreadful individual 30-minute performance – in which he gifted Watford four chances.

The Hornets – who had only won one of their previous 12 Premier League games – led controversially as Gerard Deulofeu went down easily under keeper Thibaut Courtois’ challenge and Troy Deeney scored the penalty.

Chelsea, who brought on Olivier Giroud for a debut in the second half, scored an undeserved equaliser when Eden Hazard curled home brilliantly from 25 yards.

But two minutes later, Daryl Janmaat scored a fantastic goal of his own when he cut in from the right wing, played a one-two with Roberto Pereyra and beat another couple of defenders before scoring with his weaker left foot.

Deulofeu added another when he ran from halfway before his shot was deflected home by Gary Cahill – and then Pereyra scored a fourth from Abdoulaye Doucoure’s through ball.

“We played a good match, pressed high. The match changed after the sending off but I think we played very well. Chelsea are a very big club, a big team.”

It was Chelsea’s second consecutive defeat by three goals in the Premier League, following their 3-0 home reverse by Bournemouth.

For a team in such bad form, many may have expected a collapse after Hazard’s equaliser against the run of play – but it galvanised a phenomenal final eight minutes.

Janmaat restored their lead brilliantly, before the lively Deulofeu – on loan from Barcelona – scored a fine individual goal of his own moments later.

Pereyra’s goal was also impressive, running onto Doucoure’s through ball before taking Cesar Azpilicueta out of play with his first touch and lashing past Courtois.

The £40m summer signing from Monaco was then dispossessed before the ball broke to Deulofeu, who shot into the side netting – and Richarlison had a shot blocked by Cahill after Bakayoko had given the ball away.

Both his yellow cards came after he lost the ball too.

First of all he gave the ball to Etienne Capoue and then pulled him down in the 25th minute. And five minutes later he miscontrolled the ball to Richarlison and fouled the Brazilian while stretching to try to win it back.

In all, he had 28 touches, losing the ball seven times, and failing with four of his attempted 12 passes.