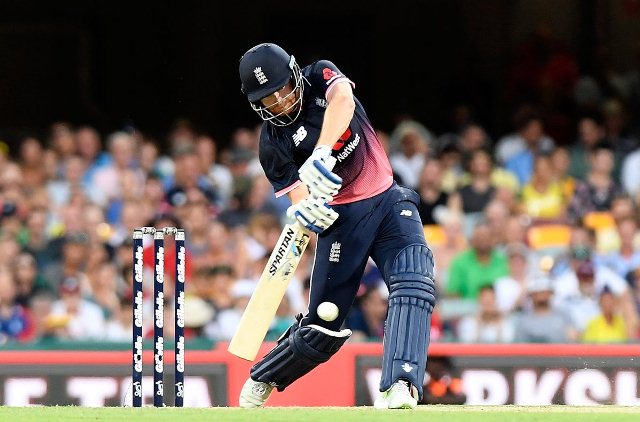 England held their nerve to take a 2-0 lead in the one-day international series with a four-wicket victory over Australia in Brisbane.

Set 271 to win after Aaron Finch hit 106, the tourists eased to 119-1 only to be checked by the wickets of Alex Hales, Jonny Bairstow and Eoin Morgan.

The basis for England’s victory was a self-assured bowling display, backed up by shrewd captaincy from Morgan.

After David Warner and Finch made an untroubled start against pace, Morgan turned to spin, with Moeen finding turn straight away and removing Warner, who edged to Root at first slip for 35.

Adil Rashid was then duly introduced to the attack, before part-time off-spinner Root also came on and bowled brilliantly, trapping Australia captain Steve Smith lbw for 18 and taking an easy return catch to dismiss the skittish Travis Head for seven.

England’s depth comes to the fore

Even with a target of under 300, England’s batsmen stuck to their attacking approach. Jason Roy was caught for just two after his record 180 in the first ODI, but Bairstow (60) and Hales (57) combined superbly to put their side firmly on top in a stand of 117.

They were out in quick succession with Hales playing a lazy shot to chop a quick delivery from impressive debutant Jhye Richardson onto his stumps, while Bairstow was caught needlessly trying to loft over the in-field.

Captain Morgan, who made a decent start, was also beaten for pace in being bowled by Starc for 21 via an inside edge to leave England 157-4.

Yet England have the batting depth to withstand such stumbles. Root accumulated runs in his customary fashion, while Buttler hit an entertaining 42 before he edged Starc behind to Carey.

Where five of nine wickets fell to spin in Australia’s innings, the hosts failed to exploit a turning track. No England batsman was remotely troubled by Head or Finch, while the tourists were able to outlast the excellent pace duo Starc and Richardson, who both bowled out before the end.

It all reflected how Australia are lacking conviction as a one-day side. They made three changes, yet produced a similar performance to their five-wicket defeat in the first match.

Finch consolidated and accumulated supremely to hit his second straight century, but again he was left without adequate support and dismissed while trying to accelerate the scoring shortly after reaching three figures.

The other batsmen seemed unsure how to approach their innings, with increasing desperation resulting in diminishing returns as Head and White wafted away but rarely connected. Australia scored just 57 off the last 10 overs.

Ultimately they needed a destructive middle-order batsman and a solid spin option. To many, that would describe all-rounder Glenn Maxwell, who was left out of the squad, with his consistency and training publicly questioned by Smith.