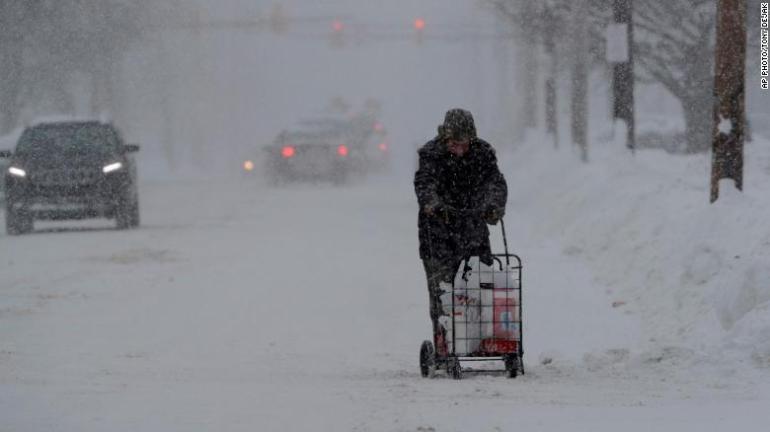 Snow, ice and a record-breaking blast of cold closed runways, highways, schools and government offices across the South and sent cars sliding off roads Wednesday in a corner of the country ill-equipped to deal with wintry weather. At least 10 people died, including a baby in a car that plunged off a slippery overpass into a Louisiana canal.

The storm turned the morning rush hour treacherous, though many people heeded warnings to stay off the roads.

Even the best drivers had trouble: Retired NASCAR champion Dale Earnhardt Jr. tweeted that he had just used his winch to help pull a car out of a ditch when he drove off the road and into a tree in North Carolina.

“NC stay off the roads today/tonight. 5 minutes after helping these folks I center punched a pine tree,” he reported. A spokesman said Earnhardt was not hurt and his pickup had only minor damage.

By midday, skies were bright and sunny in many places, but temperatures were expected to remain below freezing throughout the day in much of the region, and roads are likely to remain icy into Thursday.

“People keep asking when we will get the all-clear,” said Georgia Transportation Department spokeswoman Natalie Dale. “It will not happen today.”

Downtown Atlanta — the corporate capital of the South, notorious for its heavy traffic — was eerily quiet. Dozens of accidents were reported across the metropolitan area, one involving a salt truck. Some motorists drove through red lights rather than stop and risk sliding.

“This is kind of my scene,” said Sarah Snider, a zookeeper at the Atlanta zoo who recently moved from Vermont and marveled at how little snow it took to shut down the city.

Southern states and cities don’t have the large fleets of snowplows, salting trucks and other snow-removal equipment common in the North.

“Y’all aren’t going to make it!” a driver in a pickup truck yelled at two drivers in compact cars that were spinning their wheels on an icy boulevard near SunTrust Park, where the Atlanta Braves play. “You’re going to slide back down the hill! Turn around!”

Outside Five Points Station, the center of Atlanta’s commuter rail system, a man fell on the sidewalk and appeared unresponsive. An ambulance arrived quickly.

“The up-north way of dealing with snow needs to come down here,” Burton said. Atlanta needed “snowplows, salt already going down last night so people can get around.”

But Susan Luciano, walking in her snow-blanketed Peachtree City, Georgia, neighborhood, was delighted: “It is the most romantic setting. It is beautiful. This is God’s masterpiece. It’s refreshing, it’s rejuvenating, it’s like a postcard. It’s like our neighborhood is a living postcard.”

Snow fell in a wide band that stretched from southeastern Texas all the way to western Massachusetts. As much as 4 inches fell from North Carolina into Virginia, and in Maryland, the weather service warned of wind chills as low as minus 10 (23 below zero Celsius).