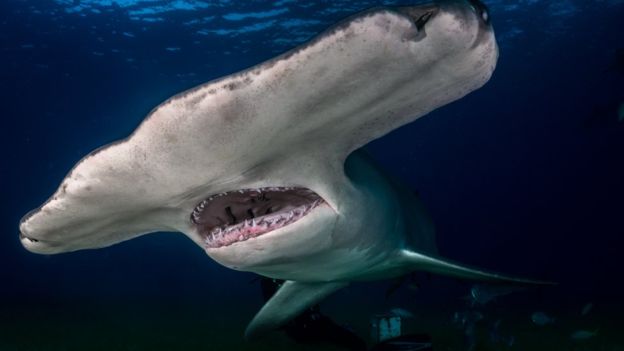 Research from the University of Southampton suggests new kinds of shark could migrate to UK waters as the oceans warm. Dr Ken Collins, from the university’s National Oceanography Centre, says 10 species of shark currently found in warmer parts of the world could inhabit our seas by 2050 because of climate change.

Here, we profile some of the species that could become a familiar fixture in coming decades.

The great hammerhead is the biggest of the sharks which could turn up in UK waters in future. The apex predator, which is found in tropical and warm temperate waters worldwide, can reach lengths of 6.1m (20ft).

The characteristic hammers on the shark’s head probably have several functions. They are used to pick up the electrical signatures of their favoured prey – stingrays – on the sea floor, but may also be used to knock and stun smaller fish.

The shark is heavily fished for its large fins, which are valued in parts of Asia as the principal ingredient in shark fin soup. It’s extremely rare for this hammerhead to bite humans.

The blacktip shark is common in coastal tropical and subtropical waters. But it’s another of the species that could become a permanent fixture around our shores in future.

Dr Collins said: “It’s likely we will be seeing more sharks spread from warmer regions such as the Mediterranean Sea towards our waters in the UK over the next 30 years.

“These include the likes of blacktips, sand tigers and hammerheads, which are currently found swimming off the coasts of Spain and Portugal.”

It’s not the largest shark on the list of 10 – they usually grow to about 1.5m (4.9ft) long. But it’s known to take spinning leaps out of the water. These jumps happen at the end of feeding runs, as the shark corkscrews through schools of fish.

Blacktips are a member of the group known as requiem sharks. This group as a whole are thought to comprise many of the recorded instances of sharks biting humans. But it’s important to emphasise that it’s extremely rare for any shark species to attack a person.

The bronze whaler, or copper shark is also found at temperate latitudes and reaches a maximum length of 3.3m (11ft).

It’s got a slender, streamlined body and has a relatively broad diet, feeding on squid and octopus; bony fish such hake, tuna and sardines; and cartilaginous fish such as dogfish, stingrays and skates. But they themselves fall prey to larger sharks and killer whales.

The oceanic whitetip is a solitary and slow-moving fish that tends to be found near the top of the water column. But it’s persistent when faced with a potential food source, and engages in “feeding frenzies” with other oceanic whitetips.

In these frenzies, several predators converge on one food source, such as a large school of fish, and go wild – biting anything that moves.

These sharks don’t tend to be found close to shore.

The research also named the seas off Cornwall as the UK’s current “shark capital”, with at least 20 species found there. The county is followed by Devon and the Scilly Isles.

Dr Collins commented: “Though while the potential number of shark species around the UK may increase in the next few decades, the overall number of sharks, especially the larger ones, will fall as a result of over-fishing, plastic waste and climate change.

“It’s really important we work together to prevent a premature extinction of these wonderful creatures.”