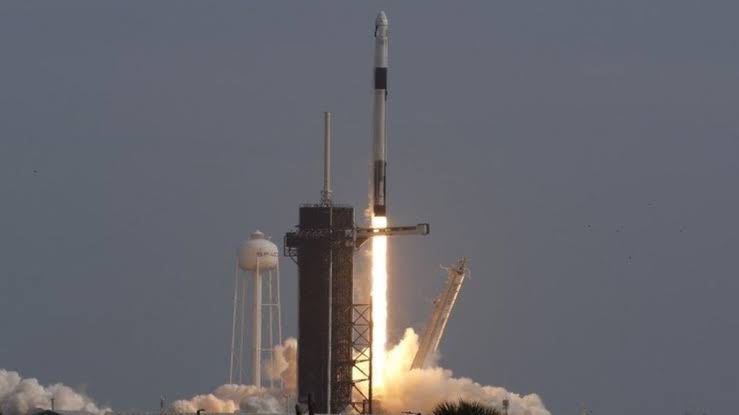 SpaceX has conducted a test of the abort manoeuvre it would use if one of its crew-carrying rockets ever developed a problem during flight.

The rehearsal at Kennedy Space Center saw a Falcon-9 vehicle’s ascent into the sky deliberately terminated just 80 seconds after lift-off.

The Dragon astronaut capsule on top fired its escape engines to carry itself clear of the “faulty” booster.

Parachutes brought the vessel to a safe splashdown some 30km off Florida.

No humans were involved in the practice abort; the only occupants of the Dragon ship were a couple of Anthropomorphic Test Devices, or “dummies”.

Nasa has contracted both SpaceX and the aerospace giant Boeing to take over routine transportation of astronauts to low-Earth orbit.

Not since the retirement of the space shuttles in 2011 have American crews been able to launch from American soil.

The apparently flawless in-flight abort demonstrated on Sunday should bring this long hiatus to close, perhaps by early summer.

SpaceX had promised the escape manoeuvre would be spectacular, and so it proved.

As the Dragon capsule fired its escape engines, the Falcon booster underneath lost aerodynamic stability, broke apart and exploded in a huge ball of flame.

But by then, the crew capsule was well away, continuing to climb skyward thanks to its powerful superDraco thrusters.

Onboard video showed the Dragon drop its service-module segment, or “trunk”, before releasing two drogue parachutes.

These 35m-wide envelopes lowered Dragon into the waters of the Atlantic Ocean a little over nine minutes after the Falcon’s lift-off.

Teams from SpaceX and the US Air Force were stationed offshore to begin the recovery of the capsule and bring it back to land.

Both SpaceX and Boeing were supposed to make their “astronaut taxi services” available in 2017, but the companies have had to grapple with – and overcome – some tricky technical challenges.

The Starliner experienced an anomaly immediately after launch that led it to waste fuel reserves, leaving it short of the propellant necessary to reach the orbiting outpost.

All that said, it seems likely both SpaceX and Boeing will get to debut crewed flights in the coming months.

Nasa has selected shuttle veterans Doug Hurley and Bob Behnken to make the first Dragon crewed flight. Mr Musk said their capsule would be at Kennedy shortly and could be ready to fly before July.

But Nasa Administrator Jim Bridenstine said the “go for launch” for Hurley and Behnken might depend on how long the agency wanted the men to stay on the space station.