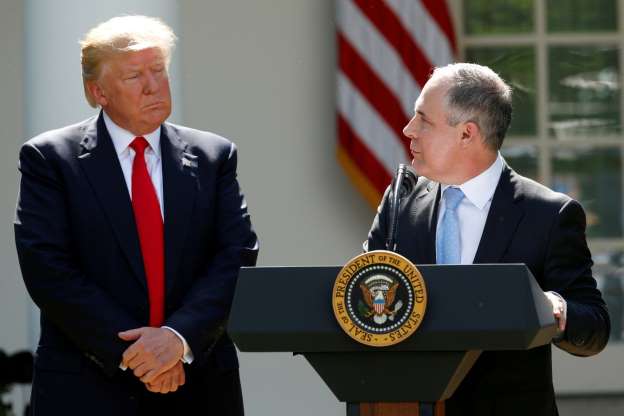 Senior White House staff members are encouraging President Trump to fire Scott Pruitt, his embattled Environmental Protection Agency chief, according to two top administration officials. While Mr. Trump has until now championed Mr. Pruitt, the officials say the president’s enthusiasm may be cooling because of the ongoing cascade of alleged ethical and legal missteps.

Some Republicans have said that Mr. Wheeler, a former Capitol Hill and E.P.A. staff member — known as a low-key but highly experienced Washington insider — would quite likely be as effective, and possibly more so, than Mr. Pruitt at undoing regulations, without drawing the embarrassing headlines of his boss.

At the White House on Monday, Sarah Huckabee Sanders, the press secretary, expressed confidence in Mr. Wheeler but declined to say whether Mr. Trump intended to fire Mr. Pruitt in the near future.

“I don’t have any personnel announcements on that front,” Ms. Sanders said. “Certainly we have confidence in the No. 2, otherwise the president wouldn’t have asked him to serve at such a senior level position within the E.P.A.”

One official said there was recognition now that Mr. Pruitt’s problems were “a bottomless pit.” But the White House doesn’t know how much more there is or what direction it could take.

Privately, even many in Mr. Pruitt’s inner circle at the E.P.A. have expressed frustration with their boss’s actions.

Mr. Pruitt’s actions have tried the patience of even his staunch supporters, including some Republicans.

“Republicans like what he’s done, but they don’t like how he’s done it,” said John Feehery, a Republican strategist who worked for the former House Speaker Dennis Hastert and the former Majority Leader Tom DeLay. “He has made some major mistakes and doesn’t seem to care that much about them. They have a lot of tolerance, but it has its limits.”

Some of the 11 federal investigations into Mr. Pruitt’s behavior span a far wider range of ethics questions. The House Oversight Committee, led by Representative Trey Gowdy, Republican of South Carolina, has opened an inquiry into Mr. Pruitt’s actions at the E.P.A., the first Republican-led investigation of a Trump administration cabinet member. On May 2, Mr. Gowdy’s staff began conducting transcribed, closed-door interviews with Mr. Pruitt’s closest aides.

Still, Mr. Pruitt’s supporters, including some of Mr. Trump’s most prominent friends in the coal and oil industries, note that the E.P.A. administrator, perhaps more than any cabinet member, has pushed through a policy agenda that allows Mr. Trump to claim that he is fulfilling a core campaign promise: stripping away regulations that he says stymie the growth of the American economy.

Harold Hamm, the chief executive of Continental Resources, an Oklahoma-based oil and gas company, who has advised Mr. Trump and championed Mr. Pruitt, has told people close to the White House that he continues to support the E.P.A. leader.

During an April 26 appearance before a Congressional committee, at which Mr. Pruitt had been expected to come under fire for his alleged ethical lapses, conservative Republicans from farm and rust belt states lavishly praised Mr. Pruitt for his policy work.