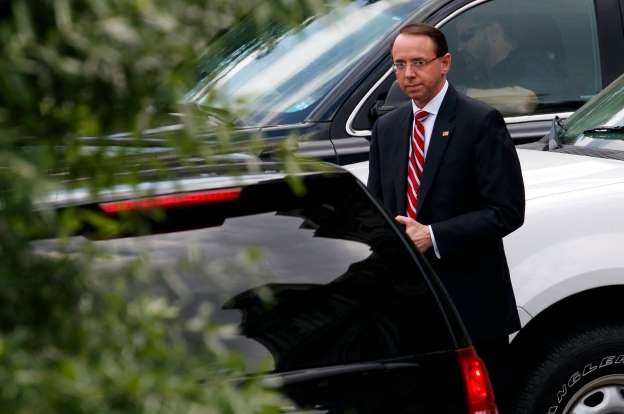 As President Trump and his allies repeatedly take aim at the Justice Department investigation into his campaign’s possible links to Russia’s election meddling, Rod J. Rosenstein, the deputy attorney general overseeing the inquiry, has mostly evaded the attacks through inventive maneuvers.

To protect the inquiry, Mr. Rosenstein has agreed to meet increasingly onerous demands from Mr. Trump and his allies on Capitol Hill. But legal scholars and former law enforcement officials fear that the measures Mr. Rosenstein has resorted to could weaken the Justice Department’s historic independence, allowing the department to be used as a cudgel to attack the president’s political enemies.

That dilemma intensified on Sunday when Mr. Trump demanded that the department investigate the F.B.I., infuriated by reports that a government informant had met with officials from his campaign in the early weeks of the investigation. Mr. Trump’s request violated decades of established Justice Department independence from presidential intervention into what it investigates, and it targeted one of the law enforcement officials’ most sensitive secrets: the identity of a source.

The department’s inspector general, Michael E. Horowitz, will look into whether the F.B.I. acted inappropriately in investigating the campaign as part of an existing review into the department’s decision to put Carter Page, a former Trump campaign adviser with longstanding links to Russia, under surveillance.

Mr. Trump has made public demands of the Justice Department in the past, but until Sunday his allies in Congress had made the strongest demands of Mr. Rosenstein. They have pushed him to act in ways that could compromise some of the department’s most sensitive investigations, demanding access to more documents and other information and threatening to hold him in contempt or impeach him.

“A lot of people feel that the department has gone too far in terms of turning over vast amounts of investigative files,” Mr. Litt said.

“In this situation, it’s appropriate to refer the president’s concern to the Justice Department’s nonpartisan inspector general, who is already investigating related matters.”

Mr. Trump’s demands prompted a new test for Mr. Rosenstein — whether he shares the name of the F.B.I. informant. “The Justice Department must go to the mat to protect the identity of an F.B.I. informant,” Mr. Goldsmith said. “Informants are the lifeblood of many investigations. To be able to attract informants, the F.B.I. must never give these names out.”

Representative Devin Nunes, Republican of California and the chairman of the House Intelligence Committee, has subpoenaed the department for all documents referring to or related to the source, prompting the latest battle between Mr. Rosenstein and Mr. Trump’s allies on Capitol Hill. They have asked the president to direct Mr. Rosenstein to reveal the name.