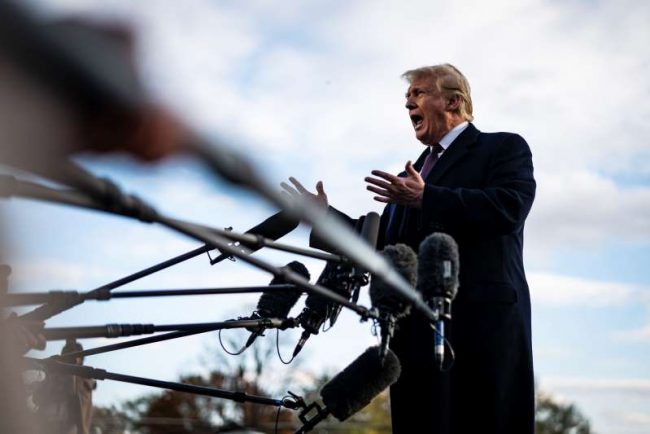 President Trump, who once called his attorney general “Mr. Magoo” and referred to the leader of North Korea as “Rocket Man,” has maintained a more respectful nomenclatorial relationship with himself, sometimes going so far as to avoid the pronoun “I” as if it were too informal.

Bill Gates once recalled the president telling him, “Trump hears that you don’t like what Trump is doing,” which is one of many famous examples of what author J.K. Rowling calls “third Trumperson:” the formal means by which Trump speaks of Trump.

At least, those seemed to be the rules until Sunday, when the president addressed himself with a nickname.

“So great that oil prices are falling (thank you President T),” Trump wrote — almost certainly referring to himself, and not the London-based rap musician, @Prez_T (warning explicit content).

While this is purely speculation, it’s possible that Trump’s new nickname for himself means he’s growing more comfortable with his presidential identity after nearly two years in the White House.

Or, conversely, Trump is drawing some subliminal parallel between himself and his predecessor, whom he has referred to repeatedly as “President O” — though not exactly warmly.

Whatever the intent behind the term, it looks destined to follow other Trump idioms into the cultural lexicon. Within minutes of its coinage, Atlantic editor David Frum was experimenting with modes of sarcasm, while harsher critics of the president wrote “President T” into satirical children’s stories and criminal conspiracy fantasies.

Several others found a precedent in history for what President T did this weekend. They recalled a famous athlete and entertainer from the late 20th century, named Laurence Tureaud.

If the name doesn’t ring a bell, it’s because Tureaud later renamed himself Mr. T. Perhaps the name “Trump” will one day be similarly forgotten.