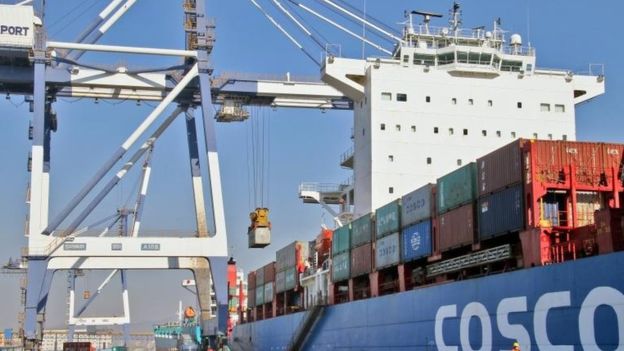 In a new report on the world economic outlook, the IMF also warns of risks from a no-deal Brexit.

For the UK, the report predicts growth of about 1.5% this year and next, but it also says there is substantial uncertainty around that figure.

Tariff increases imposed by the Trump administration in the US and its counterpart in Beijing have already contributed to a previous downgrade.

The IMF also expects China’s slowdown to continue. The forecast for this year and next is 6.2%.

In this new assessment, there are revisions for the developed economies, particularly the eurozone.

That reflects disruptions to the motor industry in Germany from new fuel emissions standards.

There are also concerns about Italy, where financial markets have been unsettled by government plans to expand spending. There are continued weaknesses in the country’s banking system as well.

The outlook for the UK is especially uncertain, although there is a small upward revision to the forecast

The economies of both Turkey and Argentina are predicted to contract, as is Venezuela’s, but it is likely to be even more severe in that case than previously expected.

All that said, the main global forecast of 3.5% does, nonetheless, still constitute a respectable increase in economic activity.

But the concern that it might not turn out so well is unmistakable.

Trade tensions appear to be the biggest worry and they have been a recurrent theme in recent IMF assessments of the economic outlook. That is reflected in the IMF’s call for action from its member countries’ governments.

“The main shared policy priority is for countries to resolve co-operatively and quickly their trade disagreements and the resulting policy uncertainty, rather than raising harmful barriers further and destabilising an already slowing global economy,” the IMF said.

The report recalls that in its October forecast, there had already been a downgrade, partly due to the impact of the tariff increases enacted by the US and China.

The IMF also says there are risks from financial markets.

The IMF’s chief economist, Gita Gopinath, said: “While financial markets in advanced economies appeared to be decoupled from trade tensions for much of 2018, the two have become intertwined more recently, tightening financial conditions and escalating the risks to global growth.”

In addition to global trade tensions, the report mentions a more substantial slowdown in China and a no-deal Brexit as possible triggers for a future deterioration in financial markets.

The general thrust of this report is that the IMF expects the recovery from the great recession of 2008-09 to continue. But the clouds, though, are gathering.