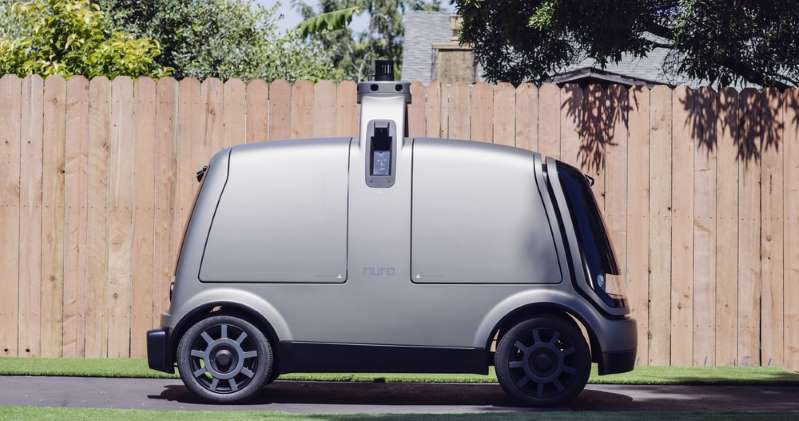 The vehicles will take part in a pilot program with Kroger in the fall. The sensors on this autonomous car include a LIDAR unit, at top.

Most self-driving cars are designed to carry people. That’s what Google’s autonomous vehicles do in Arizona, for example. But a company called Nuro has created a diminutive ‘bot that can drive itself down streets toting eggs, toilet paper, hotdogs, and other kinds of groceries to people’s homes. And interestingly, when humans aren’t your cargo, different ways of handling safety present themselves.

A pilot program involving Nuro and the grocery chain Kroger is scheduled to kick off this fall in a to-be-announced city, meaning that in the autumn, people in a test urban area should be able to order groceries by app, then have them delivered by a little independent car. Here’s how the vehicle, which was designed from the ground up just for cargo, works.

In terms of size, the Nuro car is “pretty similar to a big guy on a motorbike,” says Nuro co-founder Dave Ferguson, who previously worked with Google’s self-driving car project, now called Waymo. The vehicle is about 6 feet high, 8 feet long, and 3.6 feet wide—about half a Toyota Corolla’s width. It’s electric-powered, with a battery system designed to last all day without a recharge, Ferguson says. It weighs around 1,500 pounds.

All of that means the car can the see the world around it. And since GPS might not be totally precise, the car’s sensors can help localize it, too. “It can effectively compare what it’s seeing with what it expects in the map, and it can use that to correct its position,” Ferguson says.

“We’ve designed the whole front end of the vehicle to collapse,” he adds, “and to try to absorb as much energy as possible, in the case of any collision.”

How will the robot grocery system work?

Once the pilot program kicks into gear, it should work this way: a person in the delivery area will order the groceries they want via a Nuro app, or the Kroger website (the grocery chain already has a delivery service). After Kroger staff stock a Nuro vehicle with the goods, the car will set off for the customer’s house; the grocery customer will be able to follow the whereabouts of the car, like it’s an Uber.

Once it arrives, the human uses the app to gain access to the vehicle or a touchscreen to input a code. When they open the cargo door, they’ll have access to only their own groceries, Ferguson says, so no one swipes anyone else’s bananas.