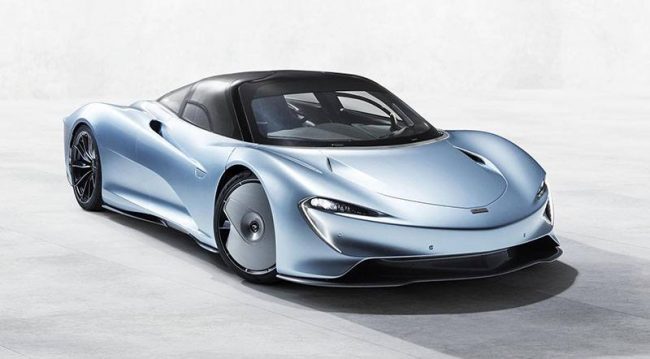 In 1998 the McLaren F1 broke a 10-year-old record to become the world’s fastest production car, clocking a maximum speed of 240.14 mph. And this car that the media called “the finest driving machine yet built for the public road” became a legend. The British carmaker subsequently created some amazing sports cars, but nothing could really be considered a proper successor to that iconic F1 until now: enter the McLaren Speedtail.

“McLaren has never built a vehicle like the Speedtail before. As our first ‘Hyper-GT’, the Speedtail is the ultimate McLaren road car; a fusion of art and science that combines an astonishing maximum speed with an iconic central-driving position and a truly pioneering approach to bespoke personalization,” said Mike Flewitt, CEO of McLaren Automotive.

In homage to the iconic F1, the new Speedtail possesses some striking similarities. Only 106 F1s were built, so McLaren will be limiting the production of the Speedtail to the same 106 models. Most noticeable is the seating — when it debuted the F1 was pioneering in many ways, but it stood out for having the driver sitting in the center of the cockpit, flanked by two passenger seats set farther back. This same seat configuration has been carried over to the new Speedtail.

The legendary F1 was powered by a normally-aspirated V12 engine (it remains the world’s fastest normally-aspirated production car), which was a technical marvel for its time; a car for the modern era, the Speedtail has gone a bit more high tech. Full details of the powertrain have not yet been released, although we do know that it will be a gas-electric hybrid system that will generate at least 1035 horsepower.

The Speedtail is constructed around a carbon-fiber McLaren Monocage and makes extensive use of lightweight materials throughout. This includes a body made entirely from carbon fiber, aluminum active suspension and carbon-ceramic brakes — all contributing to a low vehicle weight of 3,153 pounds.