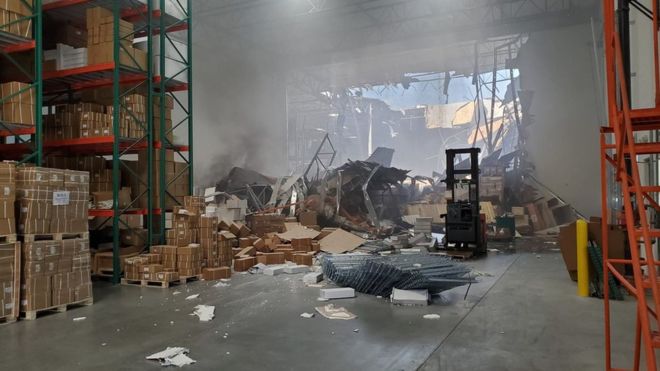 An F-16 fighter jet has crashed into a warehouse near a base outside Los Angeles, leaving the pilot and workers on the ground with minor injuries.

The pilot ejected before impact, and the small fire that broke out was quickly suppressed by the building’s sprinkler system.

The US Air Force says five people on the ground were injured. They have not confirmed if ammunition was onboard.

“That’s a military airplane in our building,” Jeff Schoffstall said in his mobile phone video.

“So the turbines are spinning, there’s no roof on the building so you’re looking through the roof, the walls are gone,” he continued.

The crash happened at about 15:45 local time (23:45 GMT) outside the March Air Reserve Base in Perris.

“It just shook the whole building,” employee Baldur Castro told CBS, adding that one worker had been knocked to the ground.

Roads to the warehouse have been blocked off as hazardous materials crews examine the rubble.

According to the Air Force Reserve, the jet was based in Sioux Falls, South Dakota, and was flying a training mission for the North American Aerospace Defense Command.