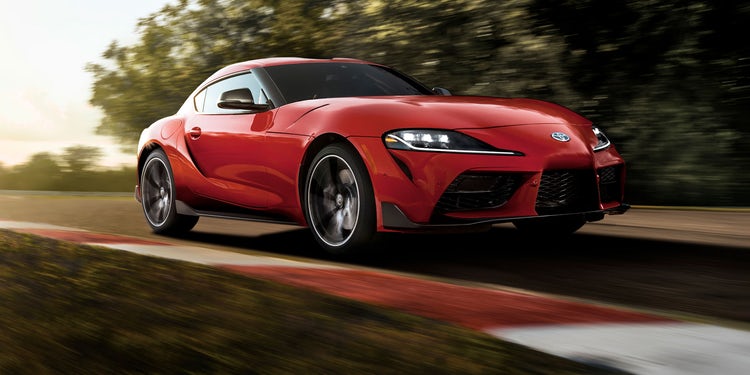 Tetsuya Tada, the 2020 Toyota Supra’s chief engineer, can be cagey. He shrewdly avoids being nailed down about the range of the car’s electrically assisted variable-ratio steering rack or its engine’s peak boost. He won’t say if this Supra is quicker around a track than the Porsche 718 Cayman S, which was its primary development benchmark. And he tells a cautious story about the relationship with BMW that allowed this iconic Toyota sports car to exist again, 21 years after the death of the Mark IV Supra.

That the fifth-generation Supra is a proper sports car, however, lies in clear relief against the uncertainty of a few details. We drove the car at Summit Point Motorsports Park’s Shenandoah Circuit in West Virginia, asking much of its chassis, brakes, and powertrain over a day of merciless lapping. Those laps reveal that battles were won by the right people during development and that Toyota is once again taking the sports car seriously. Spoiler alert: This review will not mention popular, if dreadful, movie franchises or aging, overweight Toyota inline-six engines.

This Supra’s rollout has been shrouded in a cloud of perceived compromise by internet philosophers since it was announced that it would share its platform with BMW’s Z4 convertibles.

Viewed through the lens of modern sports cars, the Supra’s all-steel structure appears exactly as it is: dated. And speaking of viewing, don’t plan on doing much of it through the coupe’s tiny rear quarter-windows. Lane changes are a mirror-reliant endeavor. Also, consider that the Supra’s body is more than three inches wider than the Toyota 86’s, yet it offers less shoulder room and feels substantially smaller inside. But there’s subtlety at work in the compromise.

That the Supra lacks the genetic purity its disciples might prefer is clear, but genealogy is far less important than creating a driving tool capable of fully immersing its pilot in the experience. And that’s what Toyota has done with the Supra.