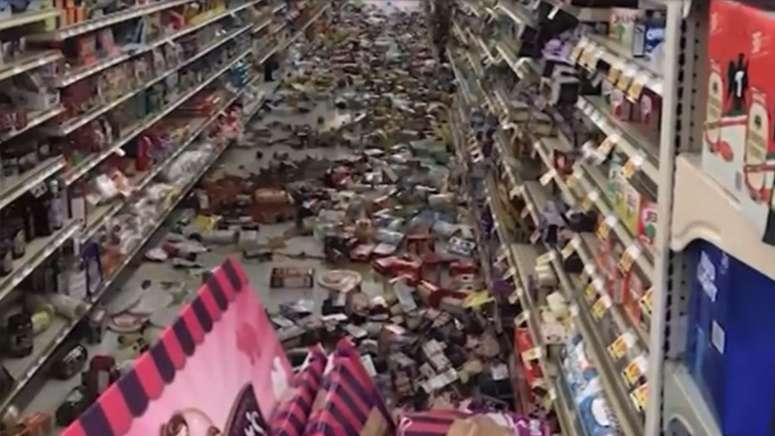 In the bottom of the fourth inning, Dodger Stadium swayed. Rides at Disneyland were evacuated, and so were movie theaters in Los Angeles. Near Palm Springs, pools sloshed and chandeliers at a casino rocked. And in the Mojave Desert town of Ridgecrest, Calif., fires roared, power went out and grocery store shelves came crashing down.

For the second time in two days, a powerful earthquake struck Southern California on Friday night, shaking a large area already on edge, from Las Vegas to Sacramento to Los Angeles to Mexico, rattling nerves and disrupting plans on a holiday weekend.

The 7.1-magnitude earthquake that rattled Southern California on Friday came one day after the strongest recorded quake there in 20 years — and seismologists warned that more episodes are expected.

“Don’t be paralyzed by fear,” Josh Rubenstein, the spokesman for the Los Angeles Police Department, wrote on Twitter. “Arm yourself with knowledge and a plan. Talk about what you would do when a big one hits. I myself just did that with my daughter and my wife.”

The United States Geological Survey reported that the latest earthquake’s epicenter was in the Mojave Desert, 11 miles from Ridgecrest — near where a 6.4-magnitude quake had hit about 36 hours earlier. Since Thursday’s earthquake, the area had been jolted by rolling aftershocks, including one of a 5.4 magnitude that had roused Californians on Friday morning.

Although the area where the earthquake struck is sparsely populated, the navy has a weapons-testing facility, the Naval Air Weapons Station China Lake, just outside Ridgecrest.

“It’s constant,” said Ms. Alexander, whose hotel in Ridgecrest is less than a five-minute drive from the naval station. “My anxiety level is over the limit.”

“The floor is cracked,” she added, saying that bookshelves, lockers and televisions had been thrown to the ground.

The quake, which struck at about 8:20 p.m. local time, was felt across a much wider area than Thursday’s quake, with reports of power failures in Los Angeles and of some damage in San Bernardino County. Gov. Gavin Newsom of California declared a state of emergency for the Ridgecrest area, and is asking for an emergency declaration from President Trump so federal funds can be made available.

Lucy Jones, a seismologist, said during a Friday night briefing by the United States Geological Survey that there would be more aftershocks. “It is clearly an energetic system,” Dr. Jones said.

Leena Panchal, a manager of Americas Best Value Inn & Suites, another hotel in Ridgecrest, said people had rushed outside because they had felt unsafe being indoors.

“It was so bad,” she said of Friday’s earthquake and its aftershocks. “I am scared. I have two children and no one is taking care of us.”

Ms. Panchal was seated during the earthquake but said that the shaking had been so violent, it would have been impossible to stand up. Standing lamps were thrown to the ground.

At 8:21 p.m., the Los Angeles Fire Department issued an earthquake alert via Twitter.

“Prepare For Aftershocks,” the department said. “When Shaking Starts: DROP, COVER, HOLD ON!”

In Los Angeles, fire officials reported localized power failures and downed wires in several city neighborhoods, but said that no major damage to infrastructure had been identified.

For now the earthquakes appear to be localized. But for California, one big question is whether these earthquakes occurring in the Mojave Desert will have any consequences for a potentially more catastrophic rupture of the San Andreas fault, the giant crack in the earth that runs along almost the entire length of the state near heavily populated areas.

The 6.4 Ridgecrest foreshock on Thursday was followed by seven quakes of magnitude 4.5 or higher until the 7.1-magnitude one on Friday. And the Friday quake so far has been followed by 15 of 4.5 magnitude or higher.

The largest known earthquake in the area occurred in 1872 and was a magnitude 8, one of the largest in California.

“I just held on to the railing,” said Mr. Lugo, who was born in Ridgecrest. “In my 27 years, I have never experienced an earthquake this big here. We weren’t expecting a bigger one, nobody was.”

Mr. Dorcey said the shaking had begun again and gone on for a minute. “It kept getting stronger and stronger,” he said.