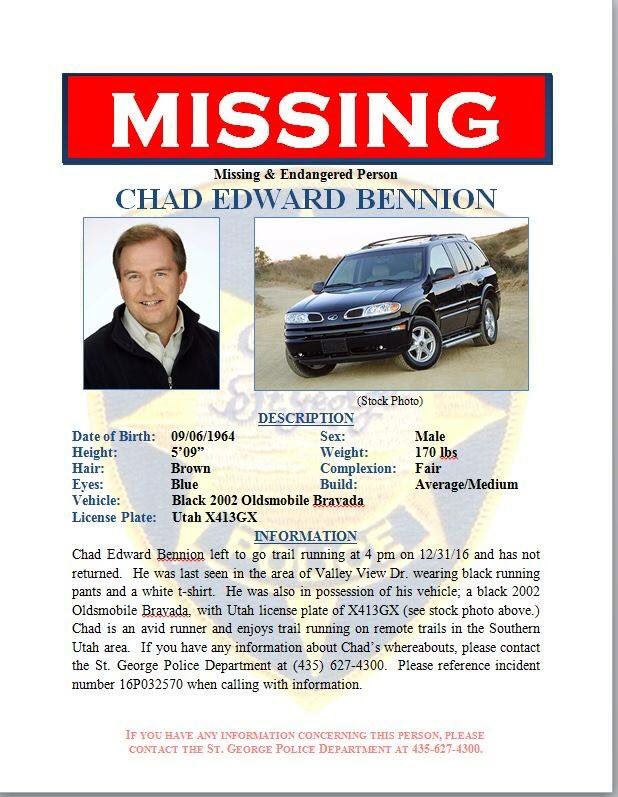 A former Utah politician was reported missing Saturday after he failed to return from running on a remote trail, police said.

St. George police say that Chad Bennion, 52, left Saturday at around 4 p.m. to run on a trail and was last seen wearing running pants and a white T-shirt. Bennion is a white male, about 5-feet 9-inches tall and weighs 170 pounds, sources.

Police say that Bennion is an avid runner who likes to run on remote trails in southern Utah. According to another source, he was out for a run while visiting his family on New Year’s Eve. “When we tried to ping his cell phone it hit a tower on North Bluff,” St. Georges police Lt. Joseph Hartman told the St. George News. “But they couldn’t pinpoint it any more accurate than that.

It could be within 3, 4, 5 or 10 miles, we don’t know.”Police said his vehicle, a 2002 Oldsmobile Bravada, has not been found. The vehicle’s license plate number is X413GX. It was also reported that Bennion was an elite runner in the 1990s and sought to run for the U.S. Olympic Team in the 1992 Games in Barcelona. He finished 14th in trials.

Bennion had represented several parts of Utah in the state Legislature from 1999 to 2005. He won a Salt Lake County election to become the county’s Republican Party chairman in 2013. Bennion resigned from his position in 2014 after he was charged with six misdemeanor counts of domestic violence in an altercation with his then-wife, who he was about to divorce.The case was resolved after pleading abeyance to a disorderly conduct count and agreeing to take an anger management class, according to court records. The rest of the charges were dismissed.