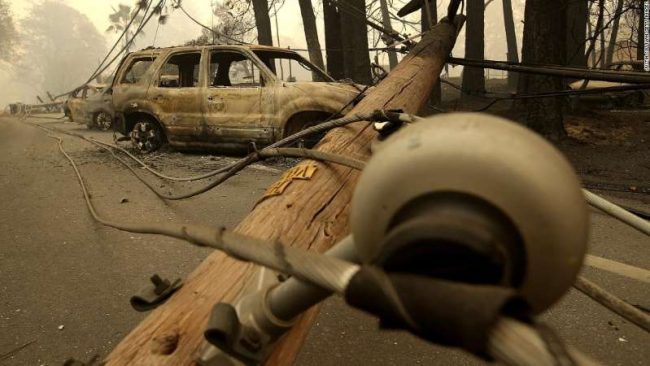 As investigators seek to determine the cause of the deadliest wildfire in California history, the culprit that fire officials have linked to more than a dozen fires that ravaged large swaths of Northern California last year is again in the hot seat.

The company, of course, is not suspected of intentionally causing any fires. Rather, it’s under scrutiny for how it maintains its sprawling infrastructure that delivers electricity to some 16 million Californians — much of it via above-ground power lines running through heavily forested public land.

Last year alone, PG&E equipment caused 17 fires, often after falling branches or trees came into contact with power lines, according to state fire officials. In 11 of those cases, state fire investigators found the company violated codes regarding brush clearance or related violations and referred the matters to local prosecutors for their review. No charges have been filed.

The company provided a list of “new and enhanced safety measures,” including upgrading its vegetation management efforts, conducting accelerated safety inspections and “proactively turning off electric power, only as a last resort, when extreme fire danger conditions are forecasted.”

It also described a “longer-term” plan to install “stronger and more resilient poles and covered powers lines across 7,000 miles of highest fire-risk areas over the course of the next 10 years.” PG&E said it has spent more than $15 billion to improve its equipment and make it more fire safe over the past five years.

PG&E and other utilities spent millions on a lobbying effort last year that resulted in legislation allowing them to spread out wildfire liability costs over many years and to pass along some of the expenses to customers.

Critics of PG&E say the problem it faces regarding fire prevention is not so complex.

“Most of these problems result from, really, a failure at gardening,” said Jamie Court, president of the advocacy group Consumer Watchdog.

“What we have to do is put a fire chief in charge and make PG&E garden its power lines and make PG&E modernize its equipment,” he said.

Court referred to the company as “a convicted felon” that “doesn’t clean up its act when it doesn’t have a police chief or fire chief standing over its shoulder.”

Court was referring to the company’s criminal conviction on six felonies for violating safety regulations and obstructing an investigation into a 2010 natural gas pipeline explosion in San Bruno, California, that killed eight people.

“PG&E does have a much larger service area and a much larger number of customers,” Fiske said. “However, the technology is definitely there for them to step up to the plate.”

He said his officers had completed investigations, made recommendations, and forwarded their work to local prosecutors, some of whom also have sought a review from the state attorney general.

“Those fires we’re talking about from last October are still in the process,” Engel said in a recent interview with CNN. “We’ve done our part and we’re waiting for the rest of it to fall into place.”