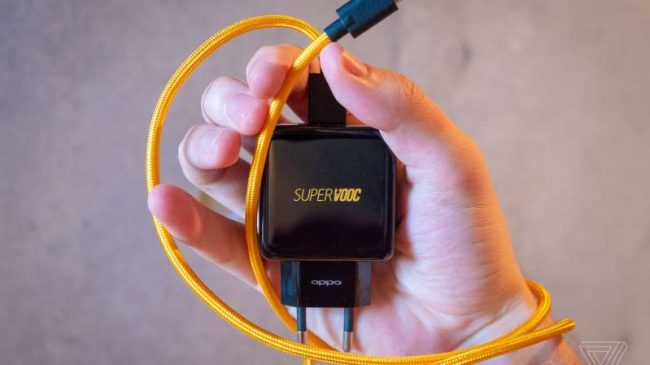 Fast charging is a standard feature on high-end smartphones, mitigating the slow progress of battery technology by allowing them to be refilled more quickly. Qualcomm’s own Quick Charge tech is widely used and regularly updated, while even Apple offers another form of the feature on newer iPhones if you’re willing to buy a MacBook charger and USB-C to Lightning cable.

This is easily the fastest I’ve ever seen a smartphone charge to full capacity. (It’s also exactly as fast as Oppo claims it should be, right down to the minute, so good job there.) And it’s not like the Find X Lamborghini has a small battery — it’s 3,400mAh, which is a little smaller than the regular Find X’s 3,730mAh cell but still bigger than the 3,300mAh OnePlus 6.

With Dash Charge, the OnePlus 6 reaches 60 percent of its capacity in the time that it takes the Find X Lamborghini to charge completely — and then takes a further 45 minutes or so to get through the final 40 percent. And to be clear, until Super VOOC, this was best in class. The iPhone X’s USB-C PD solution, for example, only fills its much smaller 2,658mAh battery about 50 percent in 30 minutes.

Super VOOC is an end-to-end solution that requires the phone’s battery to be designed to support it. The Find X Lamborghini’s battery is divided into two 1,700mAh cells, which doubles its charging capacity while the Super VOOC charger itself pushes out 10V/5A. Neither phone nor charger gets particularly hot at all when in use, which is another notable advantage over other fast-charging tech.

Unfortunately, Super VOOC is only available in a handful of Oppo phones right now, including the R17 Pro as well as the exorbitantly expensive Find X Lamborghini. But if history is any indication, you might see the technology trickle down to OnePlus phones at some point.