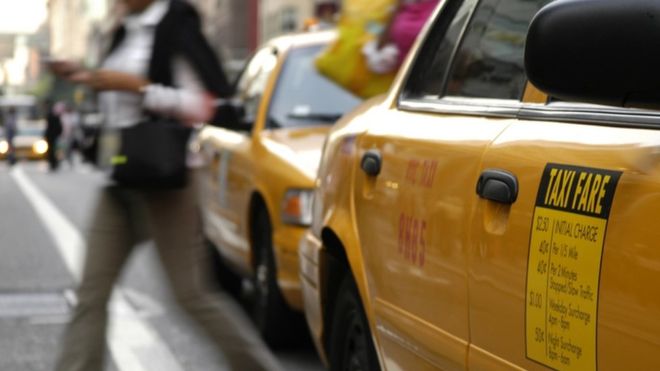 Traffic in New York is slowing down. Jams are endemic in Manhattan, especially in its business districts. Daytime traffic in the busiest areas now moves almost 20% more slowly than it did five years ago.

It seems a place ripe for wide use of ride-hailing apps that, you might think, would alleviate some of the congestion.

Except, those apps appear to be making things worse as traffic has slowed in line with the growing popularity of apps such as Uber and Lyft, suggests a study by transport expert Bruce Schaller.

Over the four years of the study, the number of cars in Manhattan seeking ride-hailing fares increased by 81%. There are now about 68,000 ride-sharing drivers across New York city. That’s about five times the number of distinctive yellow cabs licensed to operate there, he found. There are so many, his work suggests, that they spend about 45% of their time empty just cruising for fares. That is a lot of unused cars clogging a lot of busy streets.

Simple physics explains why such a glut of ride-sharing vehicles is causing, not curing, congestion, said Jarrett Walker, a public transport policy expert who has advised hundreds of cities about moving people.

“Lots and lots of people are deciding that, ‘Oh, public transport is just too much of a hassle this morning,’ or whenever, which causes a shift in patronage from public transport to ride-sharing services,”

“That means moving people from larger vehicles into smaller ones, which means more vehicles to move the same people.

There is a definite need to manage the changes that are rippling through cities as ride-sharing and autonomous cars develop and mature, said Carlo Ratti, a professor of urban technologies at MIT (Massachusetts Institute of Technology).

In 2014, Prof Ratti demonstrated how smart routing and car-pooling could cut the amount of traffic needed to move people around cities by 80%.

He stands by that prediction today but said work had to be done to soften the impact of those changes.

Prof Ratti said studies had shown it would be “disastrous” to simply swap our existing system of high personal car ownership for one in which everyone owns a robot car that follows them around.

Increased pollution, gridlock, a massive increase in urban sprawl and huge impacts on the transport industry would be the results if that scenario played out unchecked, he said.

“It is imperative that we view these new technologies with a critical eye – and guide them toward the societal goals we desire,” he said.

“If we can manage the transition in a thoughtful way, self-driving cars could help us achieve a safer and more pleasant urban experience.”