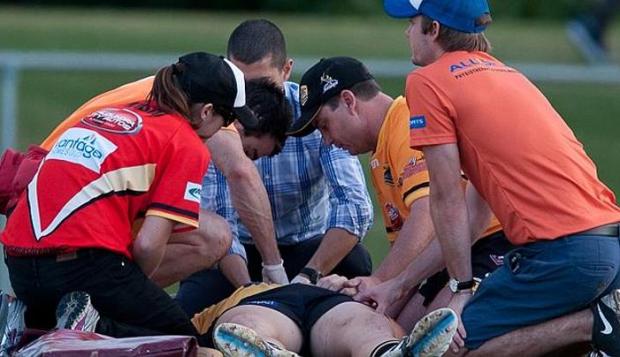 The father of two young children was treated on the field for more than half an hour by an on-duty doctor before the game was called off and he was rushed to the Royal Brisbane and Women’s hospital.

“We send our deepest condolences to James’ family and friends, and the Sunshine Coast club,” QRL managing director Robert Moore said in a statement on the QRL website.

“This is obviously a very difficult and traumatic time for a considerable amount of people — and we ask for the privacy of the family to be respected.

“Our immediate priority is to provide support for the family as well as the players, coaches and referees who were involved in this game.”

“He lived for rugby league. He was a tough competitor and a fine player who in many ways was the heart and soul of our team,” he said in the same QRL statement.

Ackerman’s family, including wife Saraa, issued a statement thanking everybody for the “overwhelming” support they have received.

“Firstly we would like to thank all the medical staff from Norths Devils/Sunshine Coast Falcons and the ambulance staff who attended to James on game day at Bishop Park,” they said.

“We want to thank the tireless medical staff from Royal Brisbane & Women’s Hospital, who kept us informed during the night. We are very grateful to the doctors and nurses from the hospital.

“All his former teammates and his former clubs for coming and seeing James. Your support has been overwhelming during this difficult time

“James loved the game of rugby league, he always played the game with his heart on his sleeve. We will miss you!”