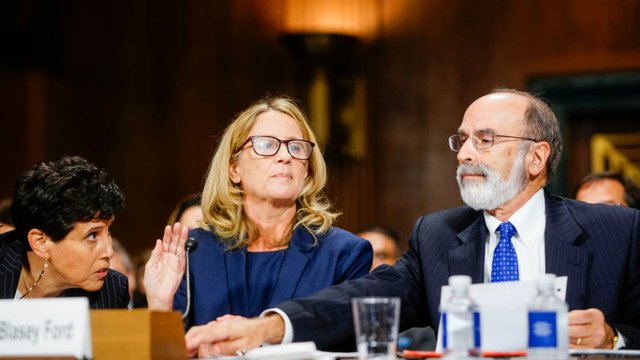 Writing to the FBI, attorneys for Professor Christine Blasey Ford said it was “inconceivable” that the agency could conduct a thorough investigation without interviewing her.

Prof Ford has testified that Mr Kavanaugh assaulted her as a teenager.

The judge vehemently denies that.

In a letter written on Tuesday to FBI director Christopher Wray and FBI general counsel Dana Boente, Prof Ford’s lawyers noted that it was five days since the fresh background check was launched.

They said the agency had not responded to the offer to interview Prof Ford, or “a series of emails and letters in which we identified witnesses and evidence that would likely assist the FBI”.

The lawyers’ concerns emerged amid reports that the FBI could wind up its investigation well before the deadline of this Friday.

Citing unnamed Republican aides, the Wall Street Journal reported that the bureau could finish “as soon as late Tuesday or early Wednesday”.

The FBI is known to have interviewed Mark Judge, a boyhood friend of Judge Kavanaugh’s, whom Prof Ford said was in the room when she was assaulted. Mr Judge told the Senate Judiciary Committee in a written statement that he did not recall any such incident – but he was not asked to testify in person.

President Trump reiterated his support for Mr Kavanaugh on Tuesday, saying he believed the Senate would approve the judge.

What will happen to the FBI report?

The FBI will pass its findings to the White House, which will give them to the Senate. The contents are not expected to be made public.

Senators will then vote on whether to confirm Judge Kavanaugh to the Supreme Court.

Senate Majority Leader Mitch McConnell accused Democrats of trying to derail the nomination on Monday, declaring: “The time for endless delay and obstruction has come to a close.”

Mr McConnell did not specify when exactly the vote would be held, but it is expected to be on Friday or Saturday.

Dianne Feinstein, the top Democrat on the Senate Judiciary Committee, has said Friday would be too soon. She argued that senators need more time to evaluate the FBI’s findings.

4 tribes sue over Oklahoma gambling compacts with 2 others

Simon Cowell has surgery for broken back after bike accident