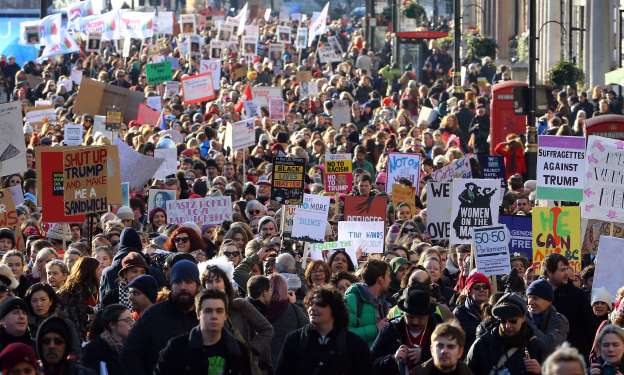 Protesters are readying themselves for the “most incredible protest in our history” to coincide with Donald Trump’s planned visit during the second half of the year.

After a meeting between Theresa May and Trump at the World Economic Forum in Davos, it was confirmed that the US president would visit “later this year”.

A Facebook event set up to organise a large-scale protest already boasts of 20,000 attendees and a further 61,000 who are interested in attending.

In the description of the event, organisers, who are using the placeholder date of 1 October, said: “It’s just been announced: Donald Trump is coming to Britain on a visit later this year. We don’t know when. But let’s be ready – and be prepared to take to the streets in the most incredible protest in our history.”

Plans for a large-scale protest have been underway since May first invited Trump to a state visit within days of him being sworn in as president. The proposed visit sparked the creation of the Stop Trump Coalition which is co-organising the protest and which is backed by musicians, MPs, activists and comedians including singer Lily Allen and former Labour leader Ed Miliband.

“It is our duty as citizens to speak out,” the group has said. “We oppose this state visit to the UK and commit ourselves to one of the biggest demonstrations in British history, to make very clear to our government, and to the world, that this is not in our name.”

Plans for the visit failed to materialise in 2017 but a planned trip to London in February to open the new US embassy was called off by Trump, which was thought to be due to the prospect of unrest. Trump, however, tweeted to say he had cancelled because of his displeasure about the new embassy.