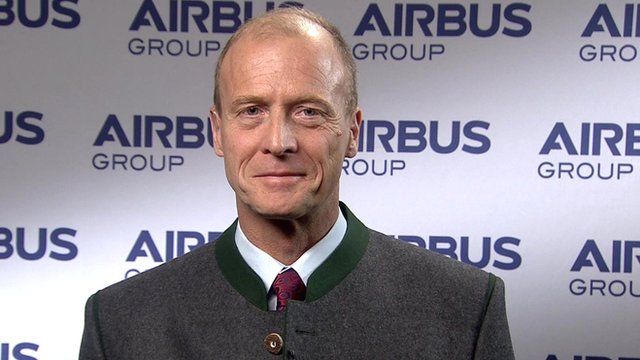 European planemaker Airbus has unveiled a shake-up of its top management team. Chief executive Tom Enders will not seek re-election when his term expires in 2019, the company said.

Meanwhile, Fabrice Bregier, chief operating officer and head of the commercial aircraft arm, will step down in February.

Mr Bregier had long been seen as the natural heir to Mr Enders, although there have been reports of tensions between the two. Plans to find an successor to Mr Enders are underway, Airbus said.

The company is already about to lose its chief salesman of 20 years, John Leahy, who is retiring.

Airbus said the board had acted to secure an orderly succession at the world’s second-largest planemaker, which has been beset by rivalries and abrupt changes in the past.

“We are confident we have taken the right decisions to ensure Airbus’ long-term stability and future success and we fully support Tom Enders to lead Airbus through this generational handover with our full support,” said chairman Denis Ranque.

Airbus is good at building and selling aeroplanes. But it’s also remarkably good at management intrigue as well.

In the past, this tended to be the result of a continual power struggle between French and German factions within the company. Airbus is seen as an industrial champion by both countries, and competing influences had to be balanced carefully.

But on this occasion, the problem appears to have been a clash of personalities – albeit between a Frenchman and a German.

Fabrice Bregier, the chief operating officer, was widely believed to want the top job. Thomas Enders, the group chief executive, kept him firmly in check – and in a recent restructuring reduced his control over the flagship commercial aircraft division.

Mr Bregier lost that power struggle – and will now leave in February. But Mr Enders is also going to move on, albeit in 2019.

He has come under pressure over his handling of corruption allegations against the group, which have triggered investigations in several countries.

It seems there’s a desire for fresh blood at the top of Airbus, to give new guidance to the business – and if necessary negotiate settlements as well.