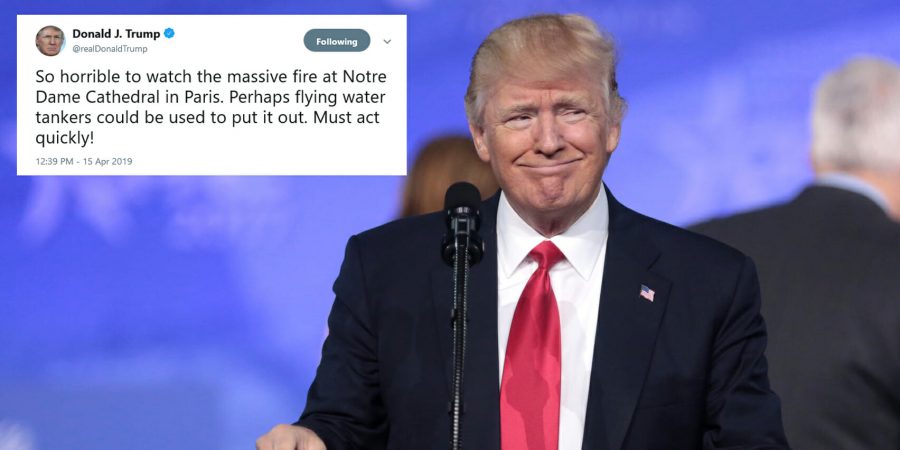 Maybe firefighting aircraft could be used to fight the fire, the US president recommended on Twitter. However, the implementation of his tips would have been fatal.

US President Donald Trump never refuses to give advice on Twitter. In one of his first tweets on Monday morning, the president advised the aircraft manufacturer Boeing, the 737 Max mid-range jet, to be renamed after two devastating crashes around the world, but simply rename it. “If I were Boeing, I’d fix the Boeing 737 Max, add some great features, and give the plane a new name,” Trump wrote.

On Monday afternoon (local time) Trump responded to the great fire in the world-famous Notre- Dame Cathedral in Paris. The images of the devastating flames were also seen in the US on many television channels. On board the government airliner Air Force One – on the way to a visit to the state of Minnesota – Trump wrote on Twitter, it was terrible to see the huge fire in the cathedral. Maybe firefighting aircraft could be used to fight the fire, he recommended. The reminder: “It must be acted quickly!”

However, Trump’s tip would have been fatal. The reaction of the French experts was therefore not long in coming: throwing water from an airplane on such a building could lead to the collapse of the entire building, wrote French civil protection on Twitter.

Also, the spokesman of the Viennese professional fire brigade, Christian Feiler, pointed out on Monday evening that an extinguishing bill from the air would, in any case, be fatal for the church. “Even with the roof open, the weight of the water would press down on the church vault,” said Feiler. The vault at least partially carry the roof, the damage would have unpredictable consequences. “The roof is designed to keep rainwater out.” Only if the roof was open, one could think about it at all. And in the case of extinguishing missions by plane or helicopter, it is often about two to three tons of weight of the fire-fighting water, as often 2000 to 3000 liters of water can be applied at once.

“The difficulties in firefighting are hard to imagine for a layman: in the attic of such churches are vast amounts of old, historic wood.” This wood burns pretty well. In addition, there is no fire extraction. That means a huge heat development.

In general, the application of cold water to the very heated sand or natural stone would be fatal, because it could cause the walls to in extreme cases at least severe damage, if not the collapse of the building. “That means I have to delete very accurately,” said Feiler. However, one often does not know exactly where to delete. It would make sense to give up parts of the building and try to hold others.