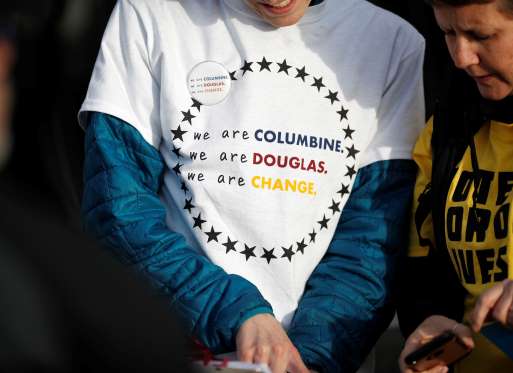 When Lorena Sanabria, who survived a shooting that left 17 people dead at her Florida high school, awoke on her 17th birthday this month, the first thing that crossed her mind was: “I’m one year closer to being able to vote.”

The massacre at Marjory Stoneman Douglas High School in February sparked a renewed interest in gun control, with students who survived the attack leading rallies, marches, walkouts and campaigns for gun legislation. People across the country, and the world, participated in hundreds of events demanding action on gun violence.

Now, leaders are hoping the momentum from the March for Our Lives movement will lead to a more enduring next phase: getting young people to the voting booth in November, an effort to change not just policy in Washington, but the people who set it.

“Who here is going to vote in the 2018 election?” David Hogg, a Parkland survivor, asked at last month’s rally in the District. “We are going to make this a voting issue. We’re going to take this to every election, to every state, to every city.”

NextGen America, a liberal advocacy group founded by hedge fund billionaire Tom Steyer, and gun-control advocacy groups Giffords and Everytown for Gun Safety have announced an initiative aimed at getting 50,000 teenagers registered to vote ahead of the midterm elections in November.

The groups plan to mail voter-registration forms to 18- and 19-year-olds on their birthdays, target them with online voter-registration ads and, where legal, preregister 16- and 17-year-olds to vote. The focus will be on students who will reach legal voting age by Election Day 2018.

The groups also are trying to do peer-to-peer recruitment, believing that the word of a friend or classmate will hold more sway than a targeted ad.

In many ways, the gun-control advocacy groups are trying to catch up with the NRA, which puts tremendous effort into elections. The group and its Institute for Legislative Action spend millions of dollars on campaign contributions, lobbying, political spending and getting its membership to vote. The group’s political victory fund ranks candidates and politicians with a letter grade, and the website of the Institute for Legislative Action — known as NRA-ILA — allows people to check their voting status.

“As students, we are really, really great as door knockers and advocates, but we’re not great at voting,” she said. “We need to work on that.”

“Registration is definitely not enough,” she said. “It needs to be followed up with conversation and relationship building with young people.”

But many of the students at the rally will not be old enough to vote in November. Rachel Hill and Kaylee Tyner, both 16-year-olds who attend Columbine High, said that made their recruiting efforts even more important.

“A generation on, this community is still reeling. A generation,” he said, his eyes welling with tears. “My niece, who was a student here, now has kids of her own, and this problem isn’t fixed. That is unforgivable.”