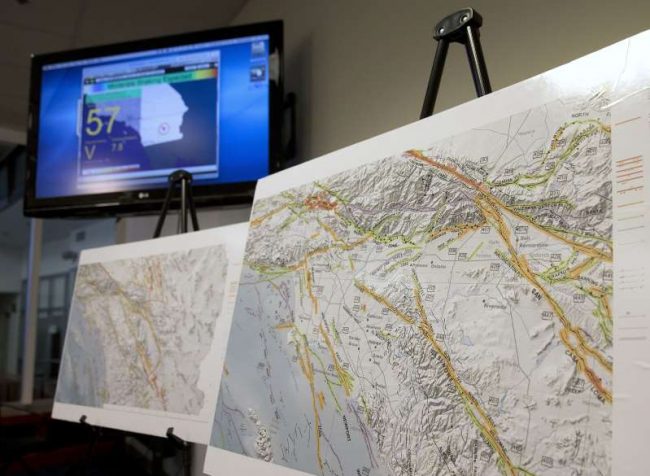 Parts of Southern California were rattled by a 4.4 magnitude earthquake Tuesday evening that was centered near La Verne but felt over a wide area.

The quake occurred at 7:33 p.m. at depth of 3.7 miles. It was followed by smaller aftershocks.

According to the USGS, the epicenter was three miles from San Dimas, four miles from Claremont and five miles from Glendora.

There have been no reports of injuries or damage at this time, a La Verne Police Department spokesperson said.

Vickie Carillo of La Verne was sitting with her son on the couch watching “Jaws 2” when they felt the shaking start.

“It was like if somebody had grabbed it and was shaking the house,” she said.

Carillo estimated that her home is only about a mile from the quake’s epicenter. She said she screamed and their two Jack Russell terriers started running around. The family picked them up and ran outside, joining about a dozen neighbors.

They walked around for about 20 minutes, hearing the rumbling of the aftershocks, before going back inside. Carillo said several closed doors had swung open and the family found trophies, books and other items on the floor.

“We haven’t had an earthquake in quite a while – I mean not like that,” she said. “I’m just glad I didn’t get in the shower like I was going to.”

The main quake was widely felt, either as a sharp jolt near the epicenter or a rolling motion farther away.

It shook buildings for several seconds in downtown Los Angeles.

The jolt also was felt 40 miles away in Sylmar to the northwest and 30 miles south in Huntington Beach. One Lakewood resident said it was a “real sharp and fast” shaking.

In the last 10 days, there have been no earthquakes of magnitude 3.0 or greater centered nearby.

This information comes from the USGS Earthquake Notification Service and this post was created by an algorithm written by the author.

The Associated Press and City News Service contributed to this report.

8:10 p.m.: This article was updated with comments from a resident of La Verne.

8 p.m.: This article was updated with information on how widely the quake was felt.

7:50 p.m.: This article was updated with information from the La Verne Police Department and the local time of the quake.

This article was originally published at 7:35 p.m.