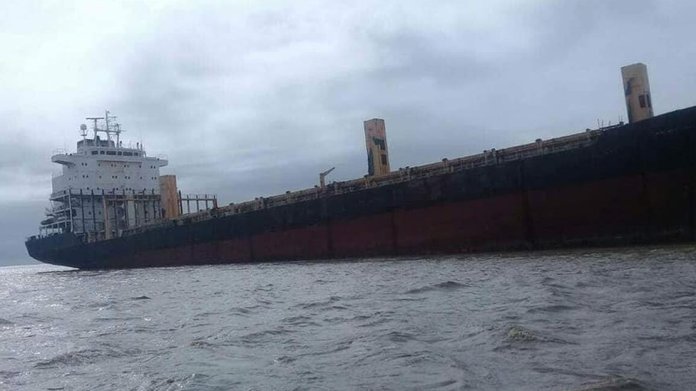 The Ghost Ship, bearing the name “Sam Ratulangi PB 1600”, was seen earlier this week floating near the coast of Myanmar’s commercial capital.

Police in Myanmar are searching a large rusty container ship for clues after it was spotted by fishermen  drifting near the region of Yangon.

“There were no sailors or goods on the vessel,” the Yangon police said.

Authorities and navy personnel boarded the ghost ship on Thursday to investigate after it ran aground, the police added.

In a statement posted on Facebook, the Yangon police said the ghost ship was “stranded on the beach [and it was] bearing an Indonesian flag”.

The general secretary Aung Kyaw Linn, of the Independent Federation of Myanmar Seafarers, said the ghost ship was not so ghostly as it was still in working order, the Myanmar Times reports.

He said that he suspects that the ship was only recently abandoned, adding: “There must be a reason.”

The 177 metres (580 ft) long vessel, which was built in 2001,  according to the Marine Traffic website, which logs the movements of ships around the world.

The ghost ship’s location was last recorded off the coast of Taiwan in 2009, and this is the first reported instance of an abandoned ship appearing in Myanmar’s waters.