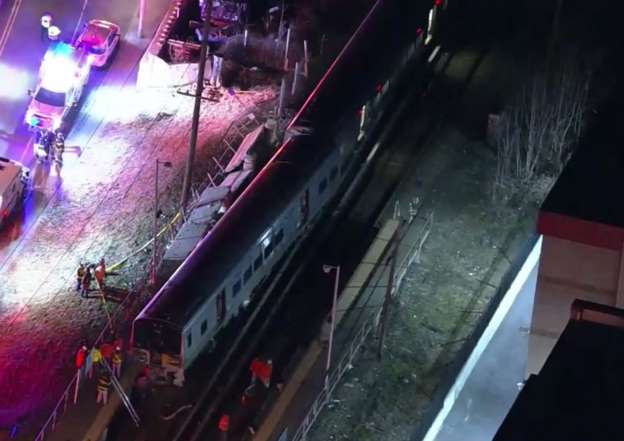 Two commuter trains traveling in opposite directions collided with a vehicle on the tracks in Westbury, killing all three occupants in the vehicle before one of the trains derailed and tore into a concrete platform Tuesday night, according to officials.

Nassau County Police Chief Patrick Ryder said the vehicle was “trying to beat the gate” when it was struck just before 7:30 p.m. Police said one of the trains, which was carrying about 200 passengers and headed for Manhattan, was going at “full speed” when it crashed.

Gov. Andrew Cuomo called for a “full investigation into the collision,” which also sent seven people on the trains to local hospitals with non-fatal injuries. It wasn’t clear if any of the crew members were injured.

Long Island Rail Road President Phillip Eng said the vehicle went around the grade crossing and was struck by the train that was leaving Westbury station. He said the gates at the crossing were properly functioning.

“The gates were down, the lights were flashing. We’ve confirmed that they were functioning,” he said. “Witnesses have said the vehicle went around the gates, at which point the train that was leaving, heading eastbound, and the vehicle collided.

Local TV news helicopter video showed the train cars standing upright after the wreck, but with the forward cars off the rails. One end of the train appeared to have struck a station platform, crushing part of it.

Many emergency vehicles were on the scene, including some ambulances. The doors of the train were open and firefighters and other emergency workers could be seen entering and moving through the cars.

April Frazier, 31, of Brooklyn, told Newsday she was on the train going to Manhattan’s Penn Station.

“I was sitting on the left side and all of a sudden the train really started rocking hard. Flames flared up on my side. I heard the conductor yell ‘Brake, brake!’ That’s when I saw the flames.”

Another passenger said she heard the sound of metal dragging along the concrete platform.

“I knew something was wrong. We were in a panic,” Kiara Jackson told Newsday. “There was a screech and then there was a thud. They told us to walk westerly and there were two small fires. Smoke was kind of coming in so they told us to just keep walking.”

Service was suspended in both directions on the Ronkonkoma and Huntington/Port Jefferson branches.