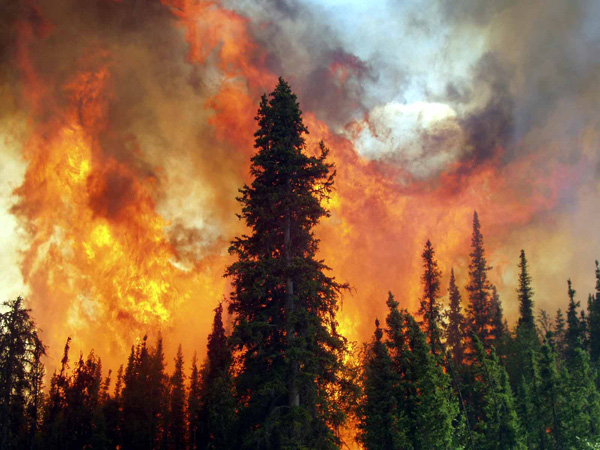 Fire crews are battling flames on the Kenai Peninsula and around the city of Anchorage, with emergency shelters set up for evacuees.

About 500 sled-dogs have also been rescued, Associated Press reports.

The authorities believe the fires were ignited by humans, but the exact cause has not yet been established.

The first blaze started at around 13:00 local time (21:00 GMT) on Sunday in the Willow area north of Anchorage – the heart of the state’s sled-dog community and home to some 2,000 people.

It initially covered just two acres, but quickly spread, fanned by strong winds and dry weather. Around 6,500 acres are now on fire, according to officials.

A voluntary evacuation order was put in place affecting around 1,700 buildings.

Alaska governor Bill Walker took part in an aerial tour of the region on Monday and said at least 25 homes and 20 other structures had been destroyed.

Two hundred dogs are being housed at the home of Big Lake resident Martin Buser, who has also been taking in displaced residents.

“Everybody’s relieved that their dogs are safe and here, but the people that have lost their homes, they are dejected,” he said.

A second blaze erupted on the Kenai Peninsula on Monday, roughly 100 miles south of Willow.

Alaska’s Department of Natural Resources said the “explosive wildland fire” had forced the evacuation of hundreds of homes.

So far there have been no reports of injuries.

Residents with properties away from the affected areas have taken to social media to offer their homes to evacuees.