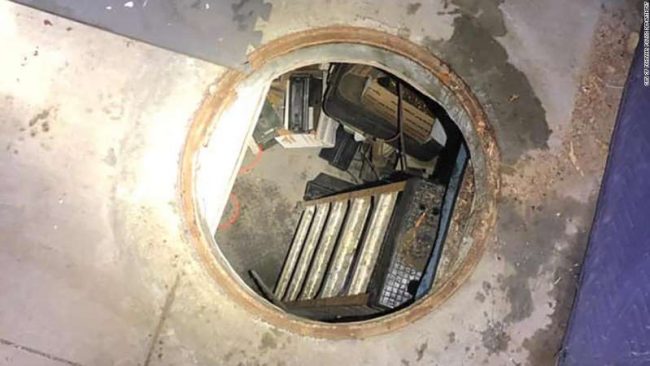 While serving a search warrant Thursday night at an alleged gang member’s Fontana home, officers uncovered a manhole. When they opened it, they found a ladder under it, police said.

Down below was a cave with a secret shooting range and hideout. Inside, officers discovered a number of weapons and thousands of rounds of ammunition, “including a 100-round drum for an AR-15 rife,” Fontana police said Friday on Facebook.

The post featured a warning from the police, along with pictures of a sparse, unfinished underground space.

“We are the champions at Hide n Seek and no manhole will help you,” it said.

Interlocking rubber mats lined the ground in one area, with something resembling furniture pads or moving blankets fixed to walls, and a US flag hanging in one corner. Another area had a dirt ground and a wall lined with sandbags.

Fontana police said they arrested an unspecified number of suspects; they did not release their names or say what charges they face.

The department left the impression it didn’t admire the handiwork.

“Friendly message to anyone who wants to engage in illegal activity and be a member of a gang. We will never give up on keeping our community safe and free of violence,” its Facebook post reads.

” … If you hide we will find you. If you run you will go to jail tired. If you do crime in our city, we will hunt you in the pursuit of justice for our community.”

The post included a parting shot on the value of hard work.

“We strongly recommend that you put as much effort as you did in your underground cave, into becoming a productive member of society,” the post said. “You will thank us later for this advice.”