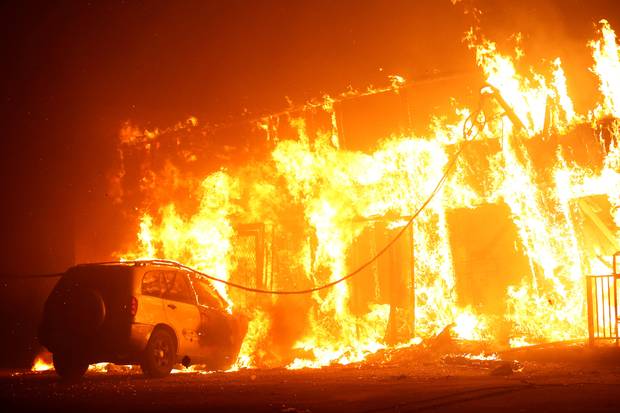 Wildfires continued to rage on both ends of the state, with gusty winds expected overnight which will challenge firefighters. The statewide death toll stood at 31. The Camp Fire that ravaged a swath of Northern California was the deadliest.

By early afternoon, one of the two black hearses stationed in Paradise had picked up another set of remains.

Sol Bechtold drove from shelter to shelter looking for his mother, Joanne Caddy, a 75-year-old widow whose house burned down along with the rest of her neighborhood in Magalia, just north of Paradise. She lived alone and did not drive.

Officials and relatives held out hope that many of those unaccounted for were safe and simply had no cellphones or other ways to contact loved ones. The sheriff’s office in the stricken northern county set up a missing-persons call center to help connect people.

Gov. Jerry Brown said California is requesting aid from the Trump administration. President Donald Trump has blamed “poor” forest management for the fires. Brown told a press briefing that federal and state governments must do more forest management but said that’s not the source of the problem.

“Managing all the forests everywhere we can does not stop climate change,” Brown said. “And those who deny that are definitely contributing to the tragedies that we’re now witnessing, and will continue to witness in the coming years.”

Firefighters battling the Camp Fire with shovels and bulldozers, flame retardants and hoses expected wind gusts up to 40 mph (64 kph) overnight Sunday. Officials said they expect the wind to die down by midday Monday, but there was still no rain in sight.

About 150,000 people statewide were under evacuation orders, most of them in Southern California, where nearly 180 structures were destroyed, including a large mobile home community in rugged Santa Monica Mountains north of Malibu.

Ellen Walker, who was in her early 70s, was home alone when the fire struck on Thursday, according to Nancy Breeding, a family friend.

Breeding said Walker’s husband was at work and called a neighbor to tell his wife to evacuate, but she was on medication and might not have been alert. Authorities confirmed her death late Friday.

“A fireman took him to the house to confirm,” Breeding said. “This is a devastating thing, and it’s happening to so many people.”