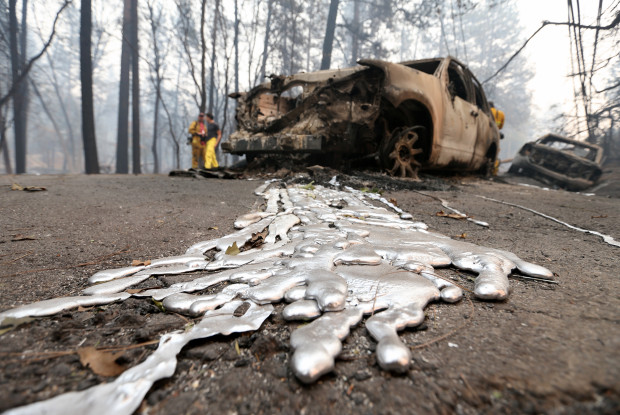 The number of deaths from California’s worst fire rose to 48 on Tuesday as authorities and family members mounted desperate searches for the hundreds still missing.

The Camp fire has scorched 130,000 acres since Thursday, ripping through mountain towns in Butte County. More than 8,800 structures – mostly homes in Paradise – were turned to rubble as the blaze charred the region.

The death toll from the fire jumped Monday when officials said they recovered the remains of 13 people as teams continued to search the burned-out rubble of thousands of lost homes. The remains of 10 people were located in Paradise, and three were found in the Concow area.

Amid the wreckage, search teams continued to sift through rubble and ash. Residents are holding out hope that their loved ones who went missing when the fire tore through their towns might be found.

The confusing search for hundreds of missing people has been complicated by many factors: bad cellphone service. A lack of access to burned-out areas. A sheer scattering of people across the region who are staying in shelters, hotels, friends’ houses and their vehicles and may have not gotten in touch with loved ones.

Over the last several days, Blake Bellairs, 36, has been searching for his brother, Josh.

Bellairs and his girlfriend drove down from Medford, Ore., on Monday night to pick up his mother and stepfather, residents of Paradise, who lost everything in the fire. Finding Josh hasn’t been so easy.

Bellairs has tried calling the local jails, authorities and TV stations, and scoured social media for mentions of his brother. He has called his brother’s friends and ex-girlfriends. One friend heard that Josh got a ride through Magalia, but who knows.

This morning, Bellairs bought glass chalk from Walmart and wrote “Missing Josh Bellairs” all over his black Ford pickup, along with his phone number.

Although Bellairs hasn’t spoken to his brother in years, he said his stepfather and mother keep in touch sporadically with Josh, who recently had fallen on rough times and was moving from place to place.

“I just want to know he’s all right,” Bellairs said standing near his truck Tuesday afternoon with tears in his eyes. His stepfather and mother have lived in Paradise for 40 years and lost everything except for a single bag of belongings.

“He called me and said: “There’s a fire; I have to get out,'” Moniz said, her eyes filling with tears.

Her husband went to a friend’s house and called again from there. That was the last time she heard from him. He doesn’t have a cellphone, she said.

Moniz said she knows their Paradise home on Edgewood Lane burned because she saw a video showing its destruction. Moniz said her husband’s daughter started a Facebook page in the hope of finding him.