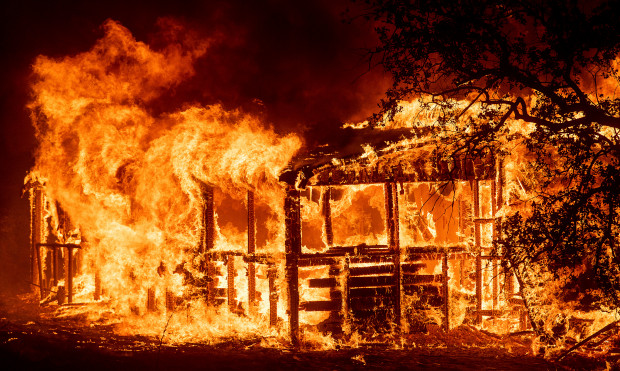 A wildfire has swept through forest land in California, closing a major highway connecting the state with Oregon and forcing the evacuation of dozens of families.

The Delta Fire has charred nearly eight square miles (about 21 square kilometres) of brush and timber in the Shasta-Trinity National Forest, which lies in a canyon along the Sacramento River.

Fire officials said the fire was caused by humans, but did not indicate whether it was arson or an accident.

The fire shut down miles of Interstate 5 and there was no indication as to when it would reopen.

Footage posted by KRCR-TV of Redding showed roaring flames and plumes of dark smoke as some lorries and cars were left abandoned on the side of Interstate 5.

Several lorries caught fire and would have to be removed before the road could reopen.

In a video, a passenger in a vehicle screams: “Oh my God, I want to go!” as trees catch fire and flames race up a hillside next to the road.

The key interstate was closed from 10 miles (16km) north of Redding to an area just south of Mount Shasta.

The Delta Fire was not immediately burning near large towns but was threatening a number of structures in an area filled with campgrounds, homes and cabins, forest spokeswoman Kerry Greene said.

The city of Dunsmuir, with about 1,500 people, was about 15 miles (24km) from the fire. Residents were issued an evacuation warning, urging them to be prepared to leave if the fire threatened.

It comes weeks after a devastating fire destroyed nearly 1,100 homes and killed eight people in the same area.

Meanwhile, a forest fire in California’s eastern Sierra Nevada continued to grow and impacts on travel were increasing, officials warned.